J.D. Greear to be SBC president nominee again
Two years after withdrawing from a closely contested election for Southern Baptist Convention president, North Carolina pastor J.D. Greear once again will be nominated for SBC president, Florida pastor Ken Whitten announced Jan. 29. In a statement released to Baptist Press, Greear said, “I am again allowing my name to be placed in nomination” after “a lot of prayer, encouragement and counsel, with the consent of our [Summit] leadership team and Veronica my wife.”

Among themes Greear would emphasize as SBC president, he wrote, are “the Gospel above all” as the convention’s source of unity; “cultural and racial diversity”; “intentional, personal evangelism”; “church planting”; and “engagement of the next generation in cooperative giving and mission.”

After baptism gone wrong, court weakens church protections
A year ago, the Oklahoma Supreme Court decided a Muslim convert to Christianity couldn’t sue First Presbyterian Church in Tulsa for inadvertently alerting his would-be murderers with its online announcement of the baptism. Ten months later, the justices changed their minds, issuing a decision that the man could have his day in court. Last week, First Presbyterian has asked the state’s top court to take a third look at the case, arguing that the justices mixed up two separate issues of law: the ecclesiastical extension/church autonomy doctrine and the ministerial exception.

Barna: Atheism doubles among Generation Z
More than any other generation before them, Gen Z (born between 1999 and 2015) does not assert a religious identity. They might be drawn to things spiritual, but with a vastly different starting point from previous generations, many of whom received a basic education on the Bible and Christianity. And it shows: The percentage of Gen Z that identifies as atheist is double that of the U.S. adult population.

Same-sex couples fight citizenship battle
Two same-sex couples filed lawsuits this week against the U.S. State Department, arguing it unlawfully discriminated against them by denying their children U.S. citizenship. Since the Supreme Court’s 2015 Obergefell decision declaring same-sex marriage a constitutional right, LGBT advocates have been pushing back against laws that uphold the biological reality that every child is the genetic offspring of just one man and one woman and that a biological connection carries weight.

The internet has made Americans more casual about religion
A recent study by Baylor University has found evidence that the more we use the internet, the less likely we are to have a specific religious affiliation or to believe in and practice one religion exclusively. The study found that 55% of Americans don’t use the internet to access religious or spiritual content; another 23% said they do so at most once a month. Three-quarters of Americans said they never talk about their religious views on social media.

The Briefing: Christians urged to pray for Hobby Lobby

The Southern Baptist Ethics and Religious Liberty Commission is calling Christians to pray for Hobby Lobby as the U.S. Supreme Court prepares to hear oral arguments this week in the government’s case against the craft retailer and another company, Conestoga Wood Specialties Corporation.

At issue is the businesses’ refusal to cover abortion-inducing drugs for its employees, a measure required of for-profit companies by the Obama administration’s healthcare plan.

“This case will set the tone for the next hundred years of church/state jurisprudence in this country,” ERLC President Russell Moore wrote in a blog post March 23.
“One of the reasons we oppose this sort of incursion into free exercise is that we want neither to be oppressed nor to oppress others,” Moore wrote. “We do not ask the government to bless our doctrinal convictions, or to impose them on others. We simply ask the government not to set itself up as lord of our consciences.”
The ERLC has created a “Pray for Hobby Lobby” avatar for use on social media, and is asking Twitter users to post with the hashtag #PrayForHobbyLobby. Read the ERLC’s news release about the Hobby Lobby case here.
Other news:
Southern Baptist Convention First VP candidate named
North Carolina pastor Clint Pressley will be nominated for the office of first vice president at the Southern Baptist Convention’s annual meeting this June in Baltimore. Pressley pastors Charlotte’s Hickory Grove Baptist Church and currently is vice president of the SBC Pastor’s Conference.

“I love the Southern Baptist Convention,” Pressley told North Carolina’s Bibilical Recorder newspaper. “I’m thankful for the work of NAMB and IMB, and I want to keep supporting the convention. I want to see more younger guys getting excited about the work of our convention and how we do missions – whether it’s in North America or around the world.” Read the full story at BPNews.net.

Westboro pastor Fred Phelps dies
Fred Phelps, whose Kansas church made headlines for years with their incendiary protests, died March 19. LifeWay’s Ed Stetzer suggests how Christians should respond to Phelps’ death, including taking the opportunity for some self-examination.

“Let’s be careful to avoid our own self-deception,” Stetzer wrote on his blog, The Exchange. “The Phelps family, and the Westboro clan they started, are full of people that need Jesus. Let’s not get Pharisaical here – the Phelps family and the people they lead in worship of a false god are sinners, but so are we. The people who spew the hateful words of Phelps’s hateful god need the love of Jesus just like you and me. Pray for them to find peace in Jesus and love as he has loved.”

Former Haitian prisoner tells his storyA Baptist volunteer recounts his experience in a Haitian jail four years ago in this story on BPNews.net. “They were difficult and perplexing and complex days, but God ordained them,” Paul Thompson, pastor of Eastside Baptist Church in Twin Falls, Idaho, told BP. In 2010, he and nine other Baptist volunteers were detained and charged with kidnapping after trying to move children to safety in post-earthquake Haiti.

Barna: Who’s watching what at the movies
Sequels were big in 2013, according to data compiled by Barna Research, although the average American only saw 3.3 movies at the theater. The study also found 11% of people saw a movie in the last two years that made them think seriously about religion or spirituality. Read more at Barna.org.

President Barack Obama meets with members of Congress to discuss Syria in the Cabinet Room of the White House on Sept. 3. White House photo by Pete Souza

(From Baptist Press) President Barack Obama is poised to address the nation tonight about why he believes U.S. forces should intervene in Syria, currently entrenched in a civil war that has reportedly killed more than 100,000 people since 2011. The President’s appeal to the public and to U.S. lawmakers (expected to vote on military action as early as Wednesday) is primarily the result of a chemical assault on civilians that U.S. intelligence has linked to the regime of Syrian President Bashar al Assad. The gas attack August 21 killed more than 1,400 people.

“This attack is an assault on human dignity. It also presents a serious danger to our national security,” Obama said late last month.

Russell Moore, president of the Southern Baptist Ethics & Religious Liberty Commission, agreed in a recent Religion News Service article that Assad’s regime is “lawless and tyrranical” and that there is just cause for war.

“That said, there are other principles missing here, both to justify action morally and to justify it prudentially,” Moore added. He used points from just war theory, which dates back to the fourth century, to support his position against U.S. intervention in Syria.

Read more about the just war ethic at BPNews.net.

“I do not see, from President Obama, a reasonable opportunity to prevail, or even a definition of what prevailaing would mean.

“Regime change is not the point of this action, and even if it were, we don’t yet know who the good guys are. Replacing one set of terrorists with another does not bring about justice or peace.”

Daniel Heimbach, a professor at Southeastern Baptist Theological Seminary, also disagrees with the President’s plan, but said the U.S. lacks a basis for intervening “in the internal affairs of a distinctly sovereign and separate state.”

He also noted, “The meaning and interpretation of a just cause for war (in a just war ethic) requires the nation being attacked (Syria) to have done, or to be doing, or to be moving toward doing some terrible wrong toward the attacking nation (United States) – not merely doing something bad within their own borders against their own people.”

The U.S. Senate may vote on Obama’s proposal for action against Syria as early as Wednesday of this week, and the House could consider it next week, according to Fox News. 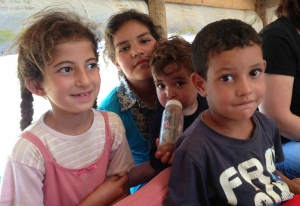 “The majority of Syrian refugees are women and children and a few older men,” Palmer said. “Husbands, fathers, brothers and uncles stayed behind to protect their precious resources – unfortunately, many times in vain. They were so thankful for the small amount of help we gave them. We promised we would be back the following week with more.”

For more than a year, BGR has assisted the refugees through emergency food packets, hygiene kits, basic shelter materials and some medicines.

While an estimated 2 million refugees have fled Syria for neighboring countries, the prospect of Western powers entering the conflict has dramatically increased the outflow in recent days, Palmer noted.

Americans place terrorism prevention high on list of national priorities
A new survey by Barna released just before the 12th anniversary of the September 11 attacks found a high majority of Americans believe preventing terrorism is as important or more important than healthcare, the break-up of the family, education, unemployment, and immigration.

The survey also found members of the millennial generation, who were children and teens on 9/11, “are among the most likely to prioritize preventing terrorism above other social concerns.”

For more Barna findings, including a comparison of the emotions people associate with 9/11 and the recent Boston Marathon bombings, go to Barna.org.