Church of the Beloved in Chicago
celebrated baptisms in Lake Michigan last August.

‘One GRAND’ emphasis returns this spring, plus a new one-on-one evangelism strategy

When Pastor Kenyatta Smith’s church moved into their new building, an important piece was missing. The former Catholic church had no baptistry.

Another Chance Church, which Smith planted in 2012, got around it by bringing in an inflatable pool when someone was ready to be baptized. Last year, that was often. The church baptized 52 people.

The Chicago church’s increase in baptisms (up from 22 in 2017) mirrors statewide growth. In 2018, IBSA churches reported 3,676 baptisms, an increase of almost 7% over the previous year. The One GRAND Sunday emphasis last April resulted in 671 baptisms in churches intentionally focused on training people to share their faith, and inviting people to respond to the gospel.

At Smith’s church, the key to more baptisms was staying the course, the pastor said. “It wasn’t a planned thing; it was more [that] we just kept working and sharing the gospel, and it just kind of happened.”

Baptisms generate excitement and are a “big boost for evangelism,” Smith said. Another Chance does a lot of evangelism training to ensure that sharing the gospel is in the church’s DNA.

Across the Southern Baptist Convention, churches are being called to make a similar commitment to evangelism, with an emphasis on keeping things simple. In January, SBC President J.D. Greear introduced “Who’s Your One?” a convention-wide effort to pray for people who don’t know Christ, and intentionally look for ways to share the gospel with them.

The challenge comes at a time when membership and baptism numbers in SBC churches continue to decline. LifeWay Research acknowledges the decline in baptisms nationwide is due in part to non-reporting churches. But even when the numbers are adjusted, churches are baptizing fewer people per member than they did in 1950, for example.

When Greear shared “Who’s Your One?” with Baptist association leaders Jan. 31, he referenced obstacles churches face in a post-Christian culture. “These are some challenging days for the Southern Baptist Convention,” said Greear, pastor of The Summit Church in Raleigh-Durham. “They’re challenging days for the church in general in the United States, but is God perhaps setting us up for one of the greatest evangelism explosions that we’ve ever seen?”

As Southern Baptists across the country and in Illinois look for effective ways to communicate spiritual truth with their neighbors, “gospel conversations” are key. A conversational approach to the gospel—sharing Jesus in the context of relationship—is the basis of many recent evangelism initiatives and training guides. And once Christians catch on, said IBSA’s Pat Pajak, and see how receptive others are to hear, the believer is encouraged to look for more opportunities to speak truth.

“But it all starts with just one conversati0n with one person,” said Pajak, associate executive director for evangelism. “We’re asking, ‘Who’s your one?’” 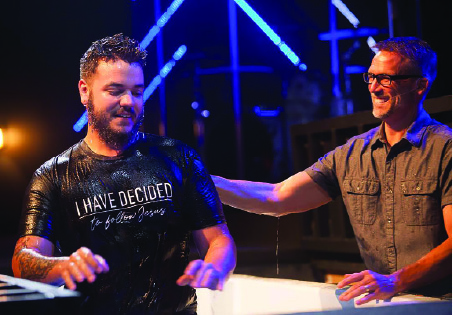 More than numbers
At Cornerstone Community Church in Marion, evangelism training is built into the church membership process. The final step in a four-pronged process is “Go.” In other words, said Pastor Michael Nave, how do you as a Christian bring other people with you?
Talking about the gospel “ought to be as natural as talking about the weather,” Nave said. Christians shouldn’t have to switch into evangelism mode; rather, the gospel should permeate the conversations and relationships we already have.

Even when evangelism is a natural outgrowth of a Christian’s spiritual development, church leaders still credit intentionality as a major factor in overall effectiveness. In 2018, Cornerstone celebrated 57 baptisms, up from 22 the previous year. The church saw the increase after implementing some intentional strategies around baptism, Nave said.

“First, we set a baptism weekend, the third weekend of each month,” he said. “We will gladly baptize someone on other weekends, but this gives us an opportunity to keep it in front of our people.” Explaining the importance of baptism is also a part of Cornerstone’s membership process. And, the church stays open to how God might work.

“From time to time, when the sermon is specifically about salvation and baptism, we offer ‘spontaneous baptism,’” Nave said. They don’t practice it frequently, he said, and are sure to give a full explanation of what baptism means. “We have simply found that some people need the opportunity to do it now!”

He recounted Peter’s Pentecost sermon in Acts 2, which stirred people to immediately respond by asking, “What shall we do?” Peter’s answer: repent and be baptized. The two acts went hand-in-hand, Nave said. “That water didn’t save them, but their public profession of faith came very quickly and naturally.”

Last year’s One GRAND Sunday initiative highlighted the links between hearing the gospel, responding, and following up that decision with baptism. As people shared their stories—on video or from the baptistry or afterward over e-mail—many talked about the journey they had taken to get to the point of baptism that day.

For some, the road was long. Others took a shorter route, like the father in Amboy who came to church for his daughter’s baptism, heard the gospel, responded, and was baptized that very day.

Counting baptisms is one way to measure health and growth, but Pajak said after last year’s One GRAND Sunday that the day was about more than numbers. As IBSA churches prepare for another One GRAND emphasis this spring, his position on last year’s statewide success is an important guiding principle.

“The great thing is that it sparked a fresh passion for evangelism across the state.”

– With additional reporting from Baptist Press