The urgent need to get the gospel to more people was a driving theme of the 111th Annual Meeting of the Illinois Baptist State Association (IBSA). Churches were challenged to make four “Pioneering Spirit” commitments in the areas of church planting, evangelism, giving, and leadership development.

The Pioneering Spirit theme also coincides with 200th anniversary to be celebrated in 1818. In keeping with the state’s bicentennial, IBSA is asking 200 or more churches to make each of the four commitments.

Moving from our current “flatland” to new heights in those areas will require a steep uphill climb, IBSA leaders said, but it’s the only option.

“We can’t be satisfied with the status quo, because the status quo is decline,” said Kevin Carrothers during his president’s message. Preaching from the book of Numbers, Carrothers, director of missions for Salem South Baptist Association, said no one remembers the names of the nay-saying Israelites who didn’t want to go into the Promised Land. Instead, the real legacy of pioneering spirit was left by Joshua and Caleb, the two spies who trusted God to provide. 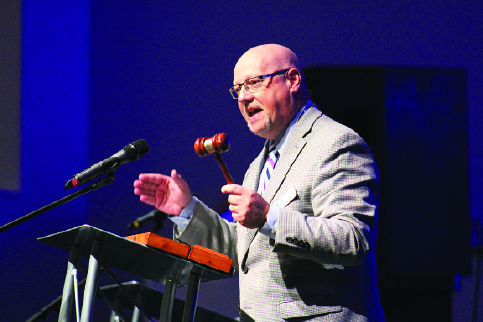 “They recognized the will of God was more important to obey than the whims and the desires of men, even if the majority won,” Carrothers said.

In the meeting’s final session Thursday morning, Pastor Sammy Simmons offered an annual sermon full of encouragement for those weary from a difficult season of life and ministry. Rely on the Lord, said the pastor of Immanuel Baptist Church in Benton, Ill. And keep taking bold steps for the sake of the gospel.

“The conditions are too rough, the lostness is too great for us to continue to do business as normal,” Simmons preached. “The cause of the gospel causes us to make bold sacrifices for King Jesus.

Fourteen new churches were planted in the state in 2017, Adams reported, and IBSA welcomed 17 new churches for affiliation during the Annual Meeting.

Adams also pointed to other measurements, including membership, Sunday school attendance, baptisms, missions volunteerism, and missions giving, that have remained relatively flat over the past several years. He ended his report by encouraging churches to embrace one or more of the four “Pioneering Spirit” commitments designed to challenge IBSA to courageously depart from the status quo.

Throughout the meeting, the “Pioneering Spirit” commitments were detailed through interviews with Illinois Baptists who exemplify faithful service in four key areas:

– Messengers approved a motion brought by the IBSA Board of Directors that all property currently held by IBSA for Baptist Children’s Home and Family Services be conveyed by deed to BCHFS in its entirety. This includes 17 tracts of property (744.9 acres) that were acquired for use and are used by BCHFS, but are currently titled to IBSA.

– IBSA’s ministry partners gave video reports throughout the business meeting, including Illinois Woman’s Missionary Union (WMU) and President Jill McNicol. God has advanced the work of WMU and given them new opportunities to reach new people, McNicol said, noting three places—Southeast Asia, the Bronx, and Cairo, Ill.—where Illinois women have served on mission in the past year.

“To the women of WMU, missions is not just a thing. It’s people. It’s lost people needing a savior. And it’s teaching Christians how to live on mission for God, to reach those lost people.”

The next IBSA Annual Meeting is Nov. 7-8, 2018, at First Baptist Church, Maryville. Tom Hufty, pastor of FBC Maryville, will bring the annual sermon, and Michael Nave, pastor of Cornerstone Church in Marion, will serve as the alternate speaker.