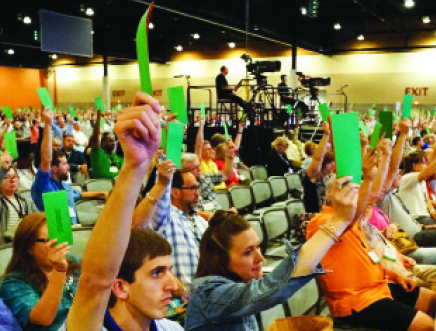 There was one point during the Southern Baptist Convention meeting in Phoenix when three thoughts of mine collided:

• How can this many people make a well-informed and well-reasoned decision?

• In the social media era, how can we make it possible for even more people to participate on a level that young adults have come to expect?

• And, then, how can we continue this very expensive system of having fewer and fewer people travel halfway or more across the country to attend?

The collision came late on Tuesday, when young messengers were pleading for the crowd in the hall to consider the weight of public opinion (read: Twitter) in their debate over alt-right racism. (“What will the people out there think of us?”) In my head, I could hear old people saying, “Who cares? This is not their decision, it’s ours—Southern Baptists—and in particular the ones who paid to travel to Phoenix to speak up and to vote.” (Maybe it was just me, speaking on behalf of old people.)

But to the young messengers pleading on behalf of the masses, it was important, because they are used to the hearing from the masses on every issue: like, heart, thumbs up, smiley face, colon/capital P tongue-sticking-out. (Yes, my emoticon reference is dated.)

Executive Committee President Frank Page told the messengers, proudly, that the Convention is an anomaly: “This is a deliberative body, the largest openly deliberative body that still exists,” Page said. “But know that the Executive Committee also deliberates carefully at multiple levels dealing with each of the issues before they’re ever presented to you, from small groups to medium-size [groups] to the large plenary sessions. Our Executive Committee members are not rubber-stampers. They ask questions, they deliberate, they discuss and sometimes disagree. So know that we hold your trust carefully and we count it to be precious.”

That’s an uneasy balance for Baptists whose theology makes us accustomed to voting on almost everything—even changing the light bulbs.

The first national Baptist body in the U.S. was the Triennial Convention, founded in Philadelphia in 1814. They met every three years. When Southern Baptists broke off in 1845, they chose to meet every year, and to include as many people as possible by sending messengers rather than electing representatives. (It is a small but important distinction.)

But technology and airline costs are pressing on our expectations: Remembering conventions with 15,000 and more regularly in attendance, we want more participants than the 5,000 who flew to Phoenix. And technology would make that possible. Yet, we do not want our denomination making knee-jerk statements at every cultural twist and turn. Theology doesn’t demand an annual meeting cycle or populist group-think.

I know these impulses seem to be in conflict: more participation, and more-reasoned debate. But watching the clock tick as debate on an unexpected resolution took time from discussion on the decline in baptisms and a renewed call to evangelism, it became clear that a relatively few people in a distant city can make reactionary decisions. Next time, the outcome might not be so positive.

(Editor’s Note: Modest Proposal 1 on merging the mission boards can be read here.)