The stories will convince you 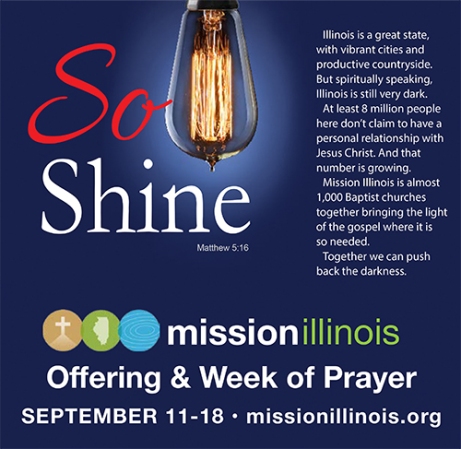 Over the course of almost five years, I have traveled to the far corners of Illinois looking for stories. Mostly they’re stories to support the Mission Illinois Offering & Week of Prayer, stories of God’s people whose work is made possible by the missions commitment of Baptists in our state. My partner in this venture, videographer Paul Wynn, and I joke that we’ve spent the last five Mother’s Days together. His kids are grown now, so his wife doesn’t mind if he’s away from home on her holiday. Maybe having a quiet house is what makes it a holiday for her.

On those May weekends and many others, we have visited new churches and compassion ministries. We’ve been from Elgin to East St. Louis, Davis Junction to Iuka, Plainfield to Metropolis, and many points in between. We’ve talked with pastors and joyful believers they’ve led to Christ. We’ve followed teenagers who braved city streets, sharing the gospel with strangers for the first time. And we’ve heard story after story from IBSA missionaries whose life-changing work brings them—and sometimes all of us—to tears.

I suppose the numbers should be compelling enough: There are 13 million people in Illinois, and at least 8 million of them do not have a faith relationship with Jesus Christ. I lived in Chicagoland 15 years, and there the “numbers” are ever before you. So many people. So few believers. I learned what it means to be in the minority, because Christians are so far outnumbered.

The biblical command should be convicting: Jesus said, “Go.” Isn’t that enough?

But what is most convincing is the stories. The stories and the people who share them convince me afresh every year that our mission work in Illinois is vitally important, worth our personal service and our prayer and our giving and our going.

I admit I felt out of place at a bar in Breese, Illinois, but it was Sunday morning and technically the bar wasn’t open. They were having church, and I knew the songs. I’m still smiling about how the young church planter and his wife started a church—in a bar—in his hometown—which, as most hometowns do, knew too much about him. I celebrated when he sent word a couple of weeks later that the church baptized its first new believers in a horse trough.

Their story is featured in our collection for the 2016 Mission Illinois Offering & Week of Prayer.
• Plus, there’s the story of a pastor’s wife we met in Casey soon after her international mission trip to aid oppressed women in South Asia.
• And the student group making its second trip from Sherman to the big city streets during ChicaGO Week.
• And the pastor planting another church nearby his downtrodden neighborhood, hoping to reach unreached people with another chance at hope in Christ.

These stories will all be featured in the Illinois Baptist. And they are included in the Mission Illinois Offering prayer guide for September 11-18, which will be distributed in participating churches. A week of devotions also is included in the special supplement that wrapped this edition of the newspaper. And all the materials are on our new website: missionillinois.org.

Our statewide goal this year is $475,000. The offering supports IBSA’s missions work, including the areas we’re highlighting this year: church planting in rural Illinois, students reaching Chicago, mobilizing Illinois volunteers for missions worldwide, and sharing Christ with unreached people. Yes, there are people in Illinois who have never heard.

Please encourage your church to participate in the Mission Illinois Offering & Week of Prayer. And please pray about your own gift for state missions. If you’re like me, the stories will convince you.

See all videos and mission study materials at missionillinois.org. Contact MIO@IBSA.org if we can help your church observe the Week of Prayer for state missions.