How will we meet the baptism challenge? 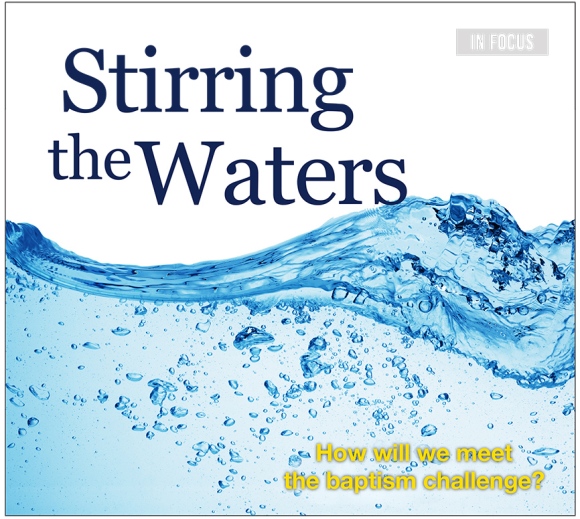 After three years of declining baptisms, SBC leaders are calling it what it is—an evangelism crisis.

What happened to evangelism in the Southern Baptist Convention?”

In fact, the total for 2014 (the most recent year for which national statistics are currently available) is the lowest number of baptisms since 1947. Southern Baptist churches baptized 305,301 people, a 1.63% decrease from the previous year. An in Illinois, the annual number of baptisms, which has hovered around 5,000, dropped to 4,400 in 2015.

“Deplorable” is how Floyd described the reality that even though there are more SBC churches than ever, and an ever larger population to reach with the gospel, it’s simply not happening—at least, not according to the baptism numbers.

Recently, Floyd and other SBC leaders have been increasingly vocal about how the numbers reflect an even bigger problem: an evangelism crisis.

The picture is bleak, but all is not lost, SBC leaders seem to agree. A turnaround is dependent on renewed appreciation for and dedication to evangelism in the Southern Baptist Convention and in individual churches. Church members need models, leaders who are soul winners themselves and can train people in the pews to share their faith.

“Let’s not be paralyzed,” Floyd wrote on his blog, urging Baptists to action. “Do something. Do more than you are doing now. Take a risk.

“Return to the importance of reaching and baptizing people.”

One reason some leaders cite for the SBC’s decline in baptisms, and overall in evangelism, is a culture that sidelines those things. In an address to the SBC Executive Committee in February, Floyd spoke about a critical shift that has brought the denomination to this point:

“Years ago, something happened where pastors and churches that reached and baptized people effectively came under the microscope of other Baptists who oftentimes did not have a heart for evangelism themselves. A culture of skepticism about evangelism began to creep into our convention. Evangelism began to die.”

Even the way we talk about evangelism is different, said IBSA’s Pat Pajak. The weekly opportunity to go out “soul winning” has been replaced with more politically correct titles such as outreach, or more often the practice has been lost altogether. “In the process, born-again believers have lost the passion and emphasis on reaching into the pagan pool and bringing the lost to Christ,” said Pajak, who leads the Church Consulting Team.

Recent research supports this: A 2012 study by LifeWay Research found that while 80% of Protestant church-goers believe they have a personal responsibility to share their faith, 61% hadn’t told anyone how to become a Christian in the previous six months. Nearly half (48%) hadn’t invited an unchurched person to attend a church event or service in six months.

LifeWay Research President Ed Stetzer broke down the research this way: “…The typical churchgoer tells less than one person how to become a Christian in a given year. The number for more than half of respondents was zero. The second most frequent answer was one.” 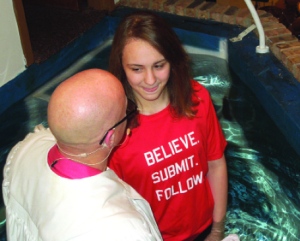 The shirt says it all — Emily Zimmer is baptized by Pastor Tracy Smith at First Baptist Church in Mt. Zion, one of many congregations in Illinois that experienced large increases in baptisms in 2015.

To right the ship, SBC leaders have pointed first to the need for spiritual awakening—first in churches, then in the culture at large. But there are also solutions to be found at the denominational level and in local churches, starting with leaders.

Floyd recalled a time when only preachers who led strong evangelistic churches were invited to speak at the SBC Pastors’ Conference and annual meeting. Those leaders were also the ones nominated for denominational offices. In his November blog post about the state of evangelism in the SBC, Floyd seemed to call for a return to those principles.

“Quite honestly, I am not impressed by how many books a pastor sells, how many Twitter followers he may have, at how many conferences he speaks, how great of a preacher he is, or how much his church does around the world if he pastors or is associated with a church that has a lame commitment to evangelizing and baptizing lost people and reaching his own community with the gospel of Christ.”

At the local level, too, leaders can help reverse the decline by creating an environment that is conducive to evangelism, said IBSA’s Mark Emerson.

“The pastors who are effectively reaching people for Christ are creating an environment of evangelism in their churches,” said Emerson, whose Church Resources team equips churches in evangelism.

“They are making sure every ministry has an evangelistic purpose, they are designing their worship services to communicate the gospel and offer an opportunity for people to make a decision. These churches are training their members to effectively enter into gospel conversations.”

Scott Foshie is one pastor currently training his congregation to have those gospel conversations. Steeleville Baptist Church will start evangelism training in April, based on the “Can We Talk?” program created by Texas pastor (and FBC Pastors’ Conference President) John Meador.

“When it’s time to bridge a conversation from small talk to gospel talk, that’s an awkward transition for people to make,” said Foshie, who has pastored the church since early 2015. The six-week curriculum combines training with practical experience; teams of three people go out into the community, visiting neighbors and practicing gospel conversations.

Foshie’s personal stake in the training goes beyond the fact that it’s happening at his church. As a student of the F.A.I.T.H. evangelism training tool, he led his future wife, Audra, to faith in Christ.

But first, people have to face down a common obstacle: fear. The pastor likened sharing the gospel to someone handing you the keys to their sports car and telling you to take it around town.

“What we need to teach them is, hey, you step out in faith, you begin to learn to share, you simply share, and the Holy Spirit’s going to help you,” Foshie said.

“Once people learn to share the gospel, it changes their life completely.”

One response to How will we meet the baptism challenge?