IBDR flood response teams activated
The heavy rains that fell in late April and early May leaving behind several inches rain have caused major flooding in Southern Illinois and the St. Louis Metro area. Illinois Baptist Disaster Relief (IBDR) has been monitoring the situation and called assessors. Now, multiple IBDR flood response teams are on the ground in Williamson and Franklin Counties in Illinois.

Samford U considers pro-LGBT student group
A recommendation by Samford University’s faculty to approve a pro-homosexual student group could have “serious implications … for the relationship” between the university and the Alabama Baptist State Convention, according to a joint statement by the convention’s president and the executive director of its State Board of Missions.

Religious liberty order doesn’t answer evangelicals’ prayers
In his biggest religious liberty push since taking office, President Donald Trump officially laid out in an executive order some of the protections he has promised faithful supporters for months. The move came on the same day that evangelical leaders gathered in Washington for the annual National Day of Prayer. One problem: This is not the executive order many evangelicals had been praying for.

Army secretary nominee bows out over marriage views
President Donald Trump’s nominee to be secretary of the Army has withdrawn from consideration amid criticism of his positions on marriage and gender. Mark Green, a state senator from Tennessee, said in a statement that false and misleading attacks against him made his nomination a distraction.

Wheaton College has removed the name of former U.S. House Speaker Dennis Hastert from the school’s public policy center, following Hastert’s indictment on charges he paid $1.7 million to cover up past sexual misconduct, and then lied to the FBI about it. J. Dennis Hastert Center for Economics, Government, and Public Policy opened in 2007.

Hastert resigned from the board of the J. Dennis Hastert Center for Economics, Government, and Public Policy May 29, and college officials announced the name change two days later in a statement on its website:

“We commit ourselves to pray for all involved, including Speaker Hastert, his family, and those who may have been harmed by any inappropriate behavior, and to continue the work and mission of the Wheaton College Center for Economics, Government, and Public Policy.”

Gallup: Americans are thinking less traditionally on moral issues
American views on key moral issues continue to trend in a less conservative direction, Gallup reports. According to research from May, “gay or lesbian relations” is morally acceptable to 63% of people, up from 40% in 2001. Also on the rise: perceived acceptability of having a baby outside of marriage, sex between an unmarried man and woman, divorce, and embyronic stem cell research.

Young people key in Ireland’s marriage vote
After a majority of Irish citizens voted to legalize same-sex marriage, Dublin’s Archbishop Diarmuid Martin said the vote is indicative of the Catholic Church’s relationship with young people. “I ask myself, most of these young people who voted yes are products of our Catholic school system for 12 years,” Martin told national Irish broadcaster RTE. “I’m saying there’s a big challenge there to see how we get across the message of the church.”

Coach withdraws from fundraiser amid controversy over group’s marriage stance
Clemson University football coach Dabo Swinney was to be honored by South Carolina’s Palmetto Family Council today along with “defenders of religious liberty” in the state. But after Swinney’s appearance at the conservative group’s fundraiser raised objections from Clemson students, GLAAD, and others, he withdrew from the event.

“I appreciate the recognition of my and the foundation’s efforts,” Swinney said, according to this ESPN report. “However, after much thought, in order to avoid a distraction for the team and the entire football program, I’ve decided it is in the best interests of all involved that I not attend the event on June 2.”

Church’s photo project restores Joplin
After a massive tornado barreled through Joplin, Mo., five years ago, First Baptist Church in nearby Carthage started a ministry to help restore and return lost family photos. The “Lost Photos of Joplin” project, begun by Minister of Music Thad Beeler, has returned more than 17,500 photos to people through reunification events.

“Why God landed [this ministry] here, I don’t know,” Beeler told The Pathway newspaper in Missouri. “But I do know that we chose to follow His lead, and we’re going to keep doing that until He shuts the door.” 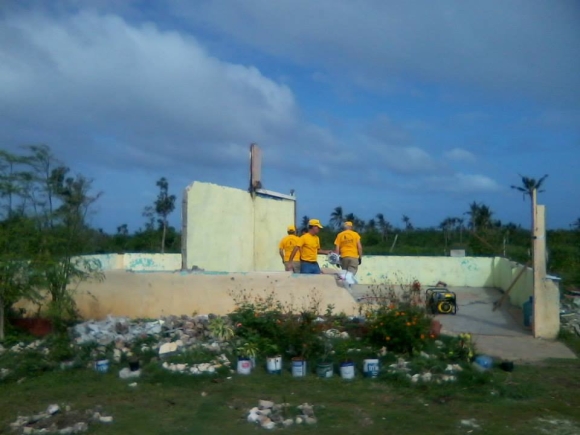 Six Illinois volunteers, arriving in the Philippines this week, will help rebuild this school on Gibitngil Island. Photo is from the project’s Facebook page.

A team of six Illinois Disaster Relief volunteers will travel to the Philippines this week to help rebuild after last fall’s Typhoon Haiyan.

The group, composed of “blue cap” leaders from around the state, is part of a multi-week, multi-crew project to rebuild a school on Gibitngil Island. The team is the first from Illinois to join the long-term relief effort in the Philippines coordinated by Baptist Global Response. Keep up with their project here.

Forum to focus on biblical sexuality
“The Gospel and Human Sexuality” is the theme of a Nashville summit planned for pastors and leaders this spring. The Southern Baptist Ethics and Religious Liberty Commission will host the April 21-23 meeting on marriage, family, purity, morality and culture.

“So many of the questions pastors grapple with today deal with situations that would not even have been possible a generation ago,” said ERLC President Russell Moore. “…We’ll talk about these questions, and how we can be faithful in ministry, Gospel-focused in engagement and Christ-shaped spiritual warriors in the ways we seek to wrestle with the principalities and powers of this age.” Read more at ERLC.com.

Blessed are the … athletic?
Just before the Super Bowl and Winter Olympics took over our TV screens, Americans weighed in on whether God rewards faithful athletes with health and success. Opinion is evenly split, according to the Public Religion Research Institute, with 48% saying yes and 47% disagreeing. But among white evangelicals, 62% believe God rewards faithful athletes. Read more at ChristianityToday.com.

Military’s religious climate questioned
The U.S. military has long been serious about protecting the religious freedom of its troops, said retired Gen. Doug Carver in submitted testimony before a House subcommittee last month. But Carver, who directs the North American Mission Board’s chaplaincy ministry, noted a climate within the military that could restrict religious liberty. Rep. Brad Wenstrup (R.-Ohio) summarized the prevailing concern: “There is a fine line between accommodation and respecting all religions and restricting religious freedom and that’s the line we are walking on here.”

Subcommittee chairman Joe Wilson (R.-S.C.) called for another hearing on the issue in the next 60 days. Read more at BPNews.net.

Bible-themed movies coming soon
2014 may well be the “Year of the Bible,” says culture writer Jonathan Merritt. At the movies, at least. Merritt lists five movies that will have the Bible front and center in the country’s consciousness, beginning with this month’s “Son of God.” Biblical biopics “Noah” and “Mary, Mother of Christ” are due late this year, along with “Exodus.” And although “Heaven is for Real” (April) isn’t based on the Bible, Merritt includes it on his list because “it will likely riff on popular Bible themes such as heaven, Jesus, and salvation.” Read more at JonathanMerritt.com.