Out of the bubble, into the world 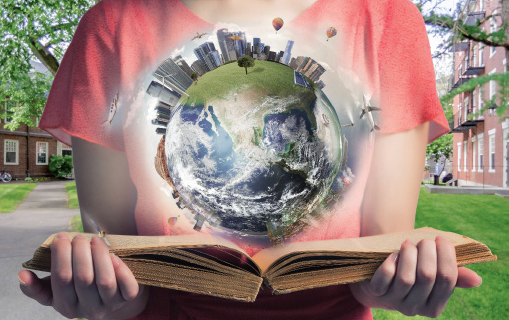 Spend any time on a Christian college campus and students there will probably fill you in on the major knock against their chosen school: it’s a bubble. The term is used to describe the sheltered environment that nurtures them while they’re in school, but may not prepare them for the real world once they graduate.

“It very easily could be a bubble,” said McKay, in his fifth year at Boyce College in Louisville, Ky. The theology student from Medaryville, Ind., is in Boyce’s seminary track, meaning he’ll earn bachelor’s and master’s degrees in five years.

“Part of going to a Christian university is a safe place to learn about the doctrines of the Bible without necessarily being challenged outright by faculty members and fellow students,” said McKay.

A 2017 analysis of data by Pew Research Center indicates a college education can bolster the faith of Christian students, particularly among evangelicals. Those who are college graduates are slightly more likely to attend weekly services and pray daily than those with some or no college. They’re also more likely to say religion is very important, and to believe in God with absolute certainty.

Taking that faith to the real world after college, though, is a different matter. McKay looked for an off-campus job where he could put into practice the things he was learning at Boyce. The school, which is the undergraduate arm of Southern Baptist Theological Seminary, requires the same core curriculum of every student, whether they’re majoring in Bible or business administration. That means courses in world religions or apologetics—defending your Christian faith—help students understand how beliefs influence how other people think and act.

For McKay, who’s planning to be a youth minister, another way out of the bubble is through time spent with experienced leaders and fellow students.

“The education I’m getting is wonderful,” he said. “It’s great that I’ve got a theological base and a way to study the Bible. But that’s really half of what I need for ministry.

“Being able to spend time with professors in class and out of class, even to be able to see how to be a good father, husband, pastor, leader, has been one of the huge takeaways for me.” And while he may not share the same specific calling—youth ministry—with every Boyce student, they are all pursuing gospel service, McKay said.

“As ministry gets hard, because it will, I’ll have people to lean on.”

Sacred spaces
At Judson University in Elgin, Ill., Professor Stacie Burtelson’s students are learning how to approach their future vocation through a Christian lens. For the future architects, that means learning to create environments that communicate the value and dignity of human life. Judson was the first Christian university with an accredited architecture program, Burtelson said, because there was a need for Christians in the field to have a place to come together and think about the intersection of vocation and faith.

The next generation of architects is aware of what’s going on in the world, said the professor, who is in her 16th year at Judson. And they want to help. Her undergraduate students focus on humanitarian architecture, the part of the field dedicated to helping people displaced by war, natural disasters, and poverty.

Instruction is still focused on code and the proper structures, Burtelson said, but there is also a focus on how the Christian architect can enter the conversation about what is happening in the world.

Her students are working to answer this question: What does Scripture say about how Christians can use their vocational skills to engage social issues and public need? This spring, sophomore architecture students designed models of emergency shelters. The exercise is based on a national competition sponsored by Samaritan’s Purse.

Students in Judson’s graduate program focus more on community-based architecture, thinking through how the Christian architect should approach each project with the goal of helping people thrive in the spaces they create.

“Looking at it from the Christian worldview lens, the ultimate goal isn’t about self or even about being thanked for the work you’ve done. It’s not about notoriety and getting published in this journal or that journal, but it’s about answering the call and really glorifying God,” Burtelson said. The work of a Christian architect might look similar to that of a non-Christian, she added, but the Christian’s work is kingdom work.

That work can build bridges—sometimes literally—to the gospel, Burtelson said, “when you show Christ caring through what you do for those in need.”