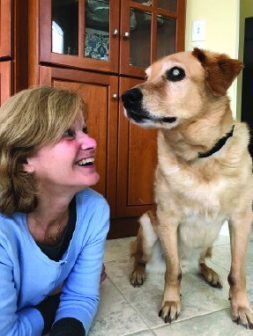 We adopted our dog Willy as a scraggly shelter puppy eight years ago. Our veterinarian looked him over during his first visit and said, “This little guy looks like he was made out of spare parts.” Willy was never very coordinated, and one eye didn’t work very well, if at all. At 17 months, when his other eye suffered a detached retina, he became completely blind.

I’ve admitted many times since then that my first thought was to look for a money-back guarantee from the shelter. I wasn’t sure we wanted a dog that couldn’t see a ball, much less catch one.

But I married a tender-hearted, compassionate wife who immediately declared that Willy needed us. Her grace gave him value, and he has continued to be a sweet and obedient companion to our family since that day. He is my wife’s prayer walking partner. He’s her conversation starter and relationship builder with our neighbors. And occasionally, he’s even a sermon illustration for me.

Now, six and a half years later, the vet tells us that Willy is in his last days. Each time Beth or I head out the door with him, we know it is one of our final walks.

But Willy doesn’t seem to have a clue about his mortality. Though his appetite and energy are fading, he slowly rises and follows us wherever we are in the house. He walks as well as he can when we take him outside. He asks for attention with his paw when he needs something. And he seems completely content just to be with us.

Nearing death is a sobering thing to think about, at least for those who don’t feel they’re nearing it yet. I remember as a young boy accompanying my dad to a nursing home each Sunday afternoon. I was learning to play the piano, and our church had a portable keyboard that I thought was cool. So I would play songs for the residents to sing, and then my dad would share a brief devotional.

At the time, I guess I wondered why we bothered to go, or why the people there bothered to come and listen. Some of them didn’t sing. Some didn’t seem to be able to walk, or even to talk. They just smiled at me while I played, or closed their eyes and nodded their heads. Many were eager to speak to me before we left each week, and to thank me for coming, maybe even more than they thanked my dad. But he didn’t seem to mind. He told me most of them didn’t have little boys that could visit very often.

Willy has taught or reminded me of many spiritual truths during his brief life. Though he is extremely limited in what he can offer in return for our care, he loves us and wants to be near us. He’s obedient, and sweet-spirited. He follows very close to us, wherever we go and whatever we ask him to do.

And now, as we go on our final walks with Willy, he has caused me to remember some anonymous, sweet, devoted saints from my boyhood. Though they too were very limited physically, they still lived each day knowing and loving their Master, wanting to be near him and to obey him, and smiling at the little boys he sent, who were learning to play the piano.

I hope that during my own final, frail walks with my Master I will be able to love and serve him with the devotion of the faithful, elderly saints I have now known throughout my life. I will be grateful if I can simply imitate the devotion of a blind dog named Willy, who somehow understood he was rescued by grace, and therefore walked faithfully with his Master.