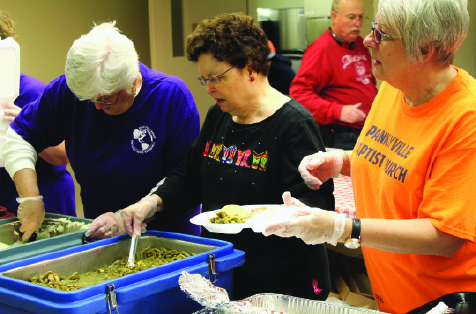 Harrisburg is a tough place right now,” said Joe Thompson, an associate pastor at the southern Illinois town’s First Baptist Church. “We’re dealing with a lot of unemployment, food insecurity for children, and there’s just a lot of under-resourced people around us. And the churches are aware of that.”

Thompson’s rural community lies in one of the state’s poorest counties. There are limited resources and manpower to meet basic needs.

But that didn’t stop Thompson and his wife, Stacey, from trying.

In January 2017, the Thompsons launched a weekly community dinner at FBC Harrisburg. Since then, the couple has been overwhelmed by how quickly God has expanded the ministry, which they named His Table.

“When we asked God to show us if this is what he wanted us to do,” Joe said, “we had no idea he would answer so loudly.”

At 5 p.m. every Thursday, the doors open and diners of all ages start trickling into the fellowship hall at FBC Harrisburg. Young children find seats in the back corner. Older men and women, some who have brought babies along, sit at long tables. Volunteers bring them their food and, if time allows, stay to chat for a bit.

The His Table volunteers are a team of about 20 people, ranging in age from 14 to 92. They arrive mid-afternoon to prepare for the evening. One group makes sandwiches for the kids to last them until the end of the weekend, while another team packs meals to deliver to shut-ins who are unable to come to dinner.

When word initially spread about the dinner ministry, funds poured in from supporters and soon five other churches—Liberty, Saline, Dorrisville, Pankeyville, and McKinley Avenue—came alongside First Baptist to help. A restaurant and a local supermarket also committed to help with food provisions.

“One of our chief concerns about launching His Table was overestimating the need,” Thompson said. The worry was unfounded. At the first His Table dinner, the Thompsons served 10 meals. Now, they see around 250 diners every week, and serve 350 meals.

“I’ve been coming since I first heard of this event,” one diner said. “My wife’s not here but this meal helps sustain us both for at least another night.” The man left that night carrying two more boxes of food to take to his bedridden wife.

“This sort of thing isn’t uncommon,” Thompson said. “These people are having to make decisions, ‘Do I pay this bill or do I eat this week?’ So to sit with people who have said their last meal was Thursday night and they’ve been waiting for Thursday night to come around again is heartbreaking.”

Thompson believes this is why the churches in the community are so eager to help.

“When you think about poverty, you don’t really think about it in your own community,” said Donnie Hughes, a volunteer from Pankeyville Baptist Church. “But it wasn’t until we saw what Joe was doing firsthand that awoke us to how great the need in our community was. And seeing children come into His Table by themselves with no parents really impacted us to get involved.”

More than a meal
“It’s not enough for people to leave here thinking ‘Boy, the spaghetti was good tonight,’” Thompson said. “If that’s all on their mind, then we’ve failed.”

His Table is meant to reflect God’s unforsaken love and compassion for his people, even amid their hardships. “Life’s pretty tough right now for these folks, but for us to be able to communicate redemptive truths to them is prayerfully and hopefully the impact we’re making,” Thompson said.

“For churches to understand the overall need, come together, and very selflessly understand that together we can pool our resources and manpower to meet the needs of the community—that is how the Church is effective.”

In time, he said, the team would like to start recovery programs and help provide jobs for people in the community. If those dreams come to fruition, the His Table team would have to find additional locations and resources. But Thompson isn’t worried.

“Ultimately,” he said, “we just want to be the Church sharing the love of Christ to the community. Just as much as Jesus did to his.”