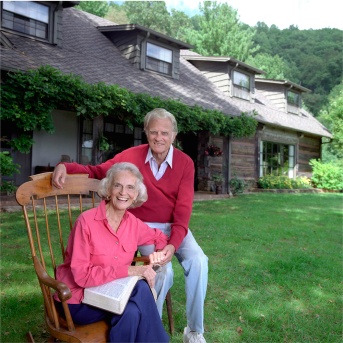 I had the privilege of meeting Billy Graham three times in my life. Each of those encounters gave me a slightly different perspective on both the man and the far-reaching scope of his ministry and influence.

I first met Dr. Graham while a college student at Judson University, where one of his sons was also a student. The chapel was buzzing that morning with news that Billy Graham was present, and I sat down eager to hear the famous evangelist. Instead, we heard the regularly scheduled chapel speaker, and learned that Dr. Graham was there as a parent and fellow worshiper that morning. I had a brief moment to shake his hand after chapel. But the memory I walked away with was of his humility, and that he didn’t need to be in the limelight.

The second time I met Dr. Graham was in the mid-1980’s, when he visited the offices of Christianity Today Inc., where I worked as a mid-level manager. Dr. Graham founded our flagship magazine in 1956, and it had become the primary voice for evangelical Christianity, and a thoughtful alternative to the more liberal Christian Century.

Throughout my 17 years at Christianity Today, we would occasionally discuss whether anyone could personify and hold together the many strands of evangelicalism as Dr. Graham did. The memory I walked away with from those years was that this evangelist, best known for declaring the simple gospel message, also founded worldwide ministries that articulated and defended conservative, evangelical Christianity, even in leading academic and theological circles.

The final time I met Dr. Graham personally was in 1999, when the North American Mission Board and its missionary to the United Nations hosted a dinner for ambassadors and diplomats in New York City. Though the setting was by no means an evangelistic crusade, I listened as Dr. Graham masterfully, disarmingly, and yet directly delivered the gospel message in an after-dinner speech to some of the world’s most influential men and women. I walked away thinking, “That gracious, winsome man uses every opportunity he has to share the gospel.”

In those brief, personal, glimpses, I saw a humble, gracious man, a father and husband who didn’t “need” the spotlight, but who leveraged every opportunity to spread the gospel, both widely around the world and deeply into the most academic and theological circles. I hope that meeting him personally those few, brief times gives me the right to now miss him as personally as I do.