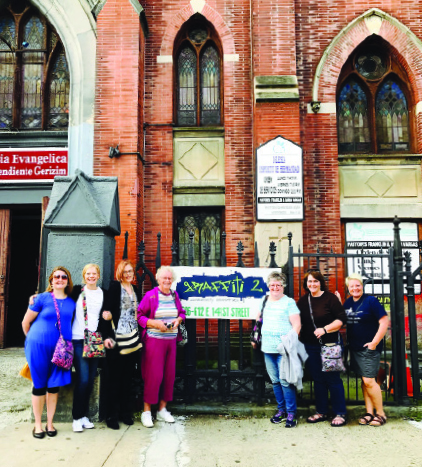 In September, a group of seven Illinois pastors’ wives navigated the New York subway every day to get to the Graffiti 2 headquarters in the Bronx, where they assisted with behind-the-scenes work needed to facilitate outreach programs for kids and adults. Photos by Andrea Hammond

Riding in the subway.

For Illinoisans who live outside the Chicago city limits—or don’t often visit—the hustle and bustle of New York City would likely bring on a good dose of culture shock.

For Terry Kenney, a pastor’s wife in Beardstown, her recent mission trip to the Big Apple brought back memories of her childhood in Chicago.

“New Yorkers do not think anything about walking” to get from place to place, said Kenney, whose husband, Brian, pastors First Southern Baptist Church in Beardstown. For the team of seven pastors’ wives from Illinois, navigating the city streets and the subway and taxis was a new, stretching experience. But a positive one.

“I never had a desire to go to New York,” Kenney said, “but now I’m going to take my husband back and let him see it.”

City reachers
The Illinois team was in the city to partner with Graffiti 2, a community ministry based in the South Bronx. Started a decade ago, Graffiti 2 is an offshoot of Graffiti Church, a Southern Baptist church planted in the early 1970s. The Graffiti ministries are grounded in a mission to meet the physical and spiritual needs of New Yorkers.

Toward that end, Graffiti 2 runs an after-school program for kids in the neighborhood, and also has started a jobs program that gives people the skills they need to learn and succeed in a career.

Standing in front of an intricate stained glass window in Graffiti’s new headquarters, the Illinois women watched one of Graffiti’s artisans at work at her sewing machine. The goods produced by Graffiti 2 artisans are sold through WorldCrafts, a fair-trade ministry of Woman’s Missionary Union.

Herself a seamstress, Kenney said it was nice to climb upstairs in the old church building and see where the artisans work, and hear about their needs. The Illinois team also helped Graffiti 2 with some administrative tasks resulting from their recent move to the building.

“We prayer-walked around their neighborhood in the South Bronx before meeting artisans and touring their new location,” said Andrea Hammond, a pastor’s wife from Grace Southern Baptist Church in Virden. “We experienced how they impact their community for Christ by finding out what their needs are, meeting them, then sharing Christ through those needs.”

At the Graffiti 2 headquarters in the Bronx, artisans create fair-trade products and learn career skills.

Carmen Halsey came up with the idea for the New York mission trip as she was brainstorming ways to help pastors’ wives connect with one another. Inspired by the concept of “destination weddings,” Halsey, IBSA’s director of women’s missions and ministries, wanted to find a place that would let wives retreat to an attractive location, while also working together to fulfill a mission.

As they worked together on a large mailing project for Graffiti 2, Halsey said, the women had an opportunity to hear each other’s stories, and share their own. That was the special part, she said, watching the multi-generational group support each other and get to know one another.

“It’s a lonely job,” Terry Kenney said of being a pastors’ wife. There aren’t too many people you can confide in, she said, and the New York trip let the women open up to one another. That part of the trip was helpful for Ailee Taylor, who serves with her husband, Derrick, at NET Community Church, the congregation they planted in Staunton last year.

“I have not been a pastor’s wife for very long, and it is a group of women that I have not been around before,” she said. “In addition to learning and serving alongside the team at Graffiti 2, I was able to connect and grow alongside other women that share the role of pastors’ wives.”

The trip also had benefits that are transferable to her own ministry in Illinois.

The mission trip was a renewing experience, she said, using decisive words for how she felt about returning to Illinois: “Filled, challenged, and fired up.”
For more information about upcoming missions opportunities for adults, students, and kids, go to IBSA.org/missions.