“If they (your church) keep putting a cape on you, and you keep letting them, then you need to be rebuked. Because you are nobody’s Superman.”
– Pastor Curtis Gilbert on how a pastor needs his people as much as they need him.

Ministry can be chaotic, said Belleville pastor Curtis Gilbert. In fact, it definitely will be. What pastors are called to is not a calling of ease or of superficial comfort, Gilbert told leaders at the 2017 IBSA Pastors’ Conference, but one that will call everything out of you.

The pastor of The Journey’s Metro East campus opened the conference with an encouragement to pastors to acknowledge the chaos, and to assess their lives and ministries in four key ways described by the apostle Paul in Titus 1:5-9. The Scripture passage was the foundation for the conference and its theme, “Time for a Check-Up.”

Gilbert urged pastors to evaluate their own love for Jesus, for the gospel, for their family, and for God’s people.

“Even the sheep that bite you are precious souls,” Gilbert said, adding that pastors can become arrogant and impatient when they stop viewing church members as God’s children, and when they forget that they themselves are every bit as much a sinner as their people. Don’t delegate all the shepherding to other people, Gilbert told pastors.

“Be with the sheep; it gives your preaching credibility,” he said, emphasizing that a pastor needs his people as much as they need him.

Joe Valenti spoke after Gilbert and smilingly accused him of stealing his message. “What he preached to you is what I’m going to preach,” said the student and missions pastor from Cuyahoga Valley Church in Broadview Heights, Ohio. “Namely, that if you would fall in love with the God of the gospel, if he would be your everything, then everything else comes out of that.”

Valenti, whose church is engaged in reaching unreached people groups with the gospel, quoted pastor and author John Piper, who has said, “You cannot commend what you do not cherish.” When pastors treasure the God of the gospel, Valenti said, relying on him for everything and never forgetting the first day they experienced his grace, “missions comes out.”

There are more than 11,000 people groups in the world, Valenti said, and more than 7,000 are still unreached with the gospel. That’s not a problem for the International Mission Board or for missionaries or for the Cooperative Program, he said. Rather, “We need to see the completion of the Great Commission as a personal problem.” 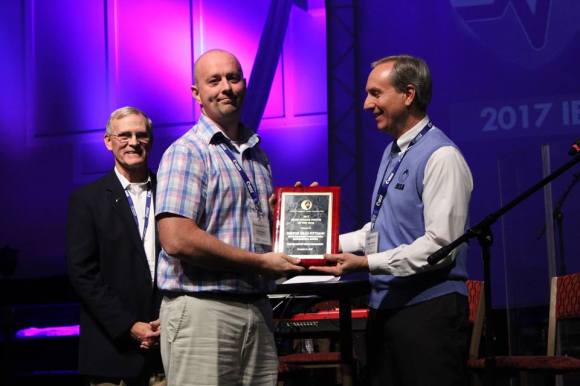 Brad Pittman (center), pastor of Grace Fellowship Church in Davis Junction, accepted this year’s IBSA Bivocational Pastor of the Year award this morning at the Pastors’ Conference in Decatur.

In light of eternity
The mass shooting at First Baptist Church, Sutherland Springs, Texas, just two days before the conference began lent a heightened urgency to the meeting and the messages. Randy Johnson, pastor of Tabernacle Baptist Church in Decatur, preached on how to share the gospel as if it’s going to be your last opportunity, while Ed Stetzer, executive director of the Billy Graham Center at Wheaton College, told pastors the world they minister in is only getting darker.

The Christian worldview decreases a few percentage points every year, said Stetzer, former executive director of LifeWay Research and a long-time analyst of church and religion trends. And it’s probably going to get worse before it gets better, he added.

“I’m convinced that one of the reasons Southern Baptists are declining is that we have hidden our light under a bushel,” Stetzer said. But as aliens and strangers in the culture—as exiles—can we love people in the midst of cultural change, he asked. “If we can’t, we have a lot of explaining to do to Christians who have—for 2,000 years—done that.”