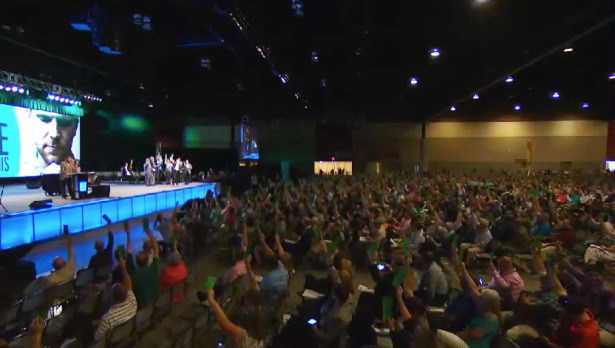 Messengers vote overwhelmingly to approve the Resolution On The Anti-Gospel Of Alt-Right White Supremacy on Wednesday, June 14 at the Southern Baptist Convention in Phoenix.

The chairman of the 2017 Resolutions Committee, Barrett Duke, opened his presentation of a resolution condemning “alt-right racism” with an apology: “We regret and apologize for the pain and confusion we created for you and the watching world when we chose not to report on the resolution on alt-right racism.”

After what the original proponent of such a resolution called “a 24-hour roller coaster,” the committee brought a resolution. Messengers to the Southern Baptist Convention approved it Wednesday afternoon, then gave their action a standing ovation afterward.

The resolution as approved was written by the Resolutions Committee working “until two in the morning,” Duke said.

Dwight McKissic, an African American pastor from Arlington, Texas, first raised the issue of white supremacy and the “alt-right” movement. But on Tuesday afternoon, the committee declined to present McKissic’s statement in the packet of resolutions offered for messengers’ approval.

He wanted the SBC “to make it very clear that we have no relationship with them. I thought it would be a slam dunk,” he said. But the committee concluded the language in his draft was not clear and could be inflammatory.

A subsequent vote to bring the statement out of the committee failed to get a required two-thirds majority.

After a dinner break, a messenger from Washington D.C. approached a microphone, was recognized, and pleaded with SBC President Steve Gaines for McKissic’s statement to be brought for a vote, so that Southern Baptists would not be characterized as racists.

In the Twitterverse, the volleys began. And in the Phoenix Convention Center, time stood still.

While Twitter pundits asked why Southern Baptists did not make an anti-alt-right statement, messengers engaged in procedural moves to bring a statement to the floor.

One messenger urged President Steve Gaines to explain where Southern Baptists stand on the issue of race. Gaines, who because of the denomination’s polity and autonomy does not speak for all Southern Baptists any more than any other pastor, responded with his own church’s deep investment in race relations and ministry to ethnic peoples in racially troubled Memphis. “There is no white race, or black race—only the human race,” he said, declaring God’s love for everyone.

Then he led a half hour or more of prayer and worship.

“I like how he took back the room. Good pastor!” a fellow pastor from Illinois observed.

Two hours later, after evangelist Greg Laurie preached and the International Mission Board commissioned new missionaries, the outcome of the vote was announced.

The motion to bring McKissic’s resolution for a vote received 58% approval, again short of required two-thirds majority. In the meantime, the committee realized its mistake and began writing a resolution denouncing racism in all forms, and “alt-right racism” in particular.

That resolution recounts the SBC’s actions of the past two decades, seeking forgiveness for racism in its history and pursuing reconciliation, the election of African Americans to key leadership, and the election of H.B. Charles as Pastors Conference President on Monday.

Charles told the Washington Post, “I’m glad we picked up the fumble…It could have had a really bad effect on our witness.”

“We certainly don’t want a watching world to think that we harbor or sympathize with those absolutely vicious forms of racism represented in alt-right ideology. We don’t.”

The resolution went through ten editions, Duke said, “but we were glad to do it…We believe we carried the heart of what Bro. McKissic wanted to do into the heart of this resolution,” although Duke said not much of the actual language McKissic first submitted remained.

McKissic was in the audience at a news conference following the final vote. Afterward, Duke expressed a personal apology, and the men shook hands. “I’m glad things have developed as they have, for the kingdom of God’s sake. I think we’re back to a good place after a 24-hour roller coaster ride.” Although he was not pleased with the process, McKissic called the vote “a courageous stand.”