Like most Americans, I’ve always respected founding father Thomas Jefferson. But I was surprised, and frankly disappointed, to learn recently that in the latter years of his life, Jefferson actually constructed his own version of the Bible. He did so by literally cutting and pasting, with razor and glue, numerous sections of the New Testament, intentionally omitting the miracles and any mentions of the supernatural, including the resurrection of Jesus.

To be fair, Jefferson apparently didn’t refer to his reconstruction as a Bible, but rather titled it “The Life and Morals of Jesus of Nazareth.” Yet over the years it has come to be commonly known as “The Jefferson Bible.”

In fact, from 1904 into the 1950’s, the Government Printing Office gave all new members of Congress a copy of the Jefferson Bible, and that practice was resumed by a private publisher in 1997. The American Humanist Association published its own edition of the Jefferson Bible in 2013, adding passages from the Quran, the Buddhist Sutras, the Book of Mormon, and other works, and distributing it to members of Congress as well as President Obama. 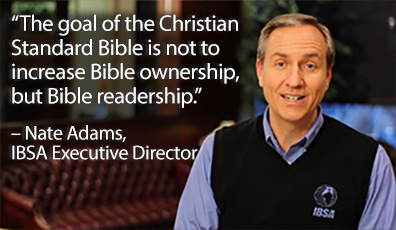 Recently I was invited to LifeWay, along with other state executive directors, for an overview presentation of the new translation. In fact, it was there that the Jefferson Bible was used as an illustration of what can happen when God’s Word is not stewarded carefully, and faithfully. In the CSB, LifeWay has sought to balance the two most important aspects of Bible translation: accuracy and readability.

I came away from that presentation greatly encouraged, but also greatly challenged. You see, I also learned during this presentation that Bible ownership is not really the main problem today. 88% of American households own a Bible, and the average number of Bibles per household is 4.7. The real problem is that only 37% of Americans read the Bible once a week or more. With the CSB, LifeWay’s goal is not to sell more Bibles; it is to grow the number of people who read the Bible, and are spiritually transformed by it.

LifeWay has carefully studied the activities linked to true spiritual growth. And the number one activity contributing to spiritual growth is Bible reading (91%), followed by church attendance (87%), personal prayer life (85%), and being mentored by another mature believer (81%).

By providing a freshly updated translation, LifeWay is seeking to grow the number of people engaged in the activity that most often leads to spiritual growth—reading the Bible. In doing so, they have relentlessly preserved accuracy, calling on some of the world’s finest Bible scholars to serve on the translation committee. Yet they haven’t sacrificed readability. Rather, they have sought to carefully balance the two.

So I came home from LifeWay with a new Bible. I don’t really need one. I’m the son of a pastor and a school librarian, and I worked in Christian publishing for almost 20 years. I already have way more Bibles than the 4.7 average per household.

But this new Bible gives me a fresh incentive to delve more deeply and more frequently into God’s Word. It gives me a renewed appreciation for our friends at LifeWay who faithfully steward this translation. And it gives me a reason to give others a new copy of the Bible, and to pray that our reading of it will bring the true spiritual growth that God desires.