Cloudy with a chance of surprises, part 1

We live by God’s surprises,” said Helmut Thielicke. The German pastor was speaking in times more trying than ours, but in the darkest days of WW2, he could see the hand of God at work—and was amazed by it.

Dare we say the same of the year just past?

We were surprised by events we witnessed. In their unfolding, we sought the reassurance of God’s sovereignty. Here are some noteworthy moments for Baptists in Illinois—some heavy, some light—and what they may say about the year before us.

Standing on the promises 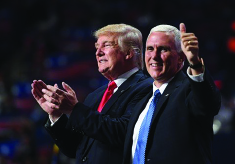 A third of Americans (34%) think Donald Trump will be a “good” or “very good” president, while 23% say “average” and 36% expect a “poor” performance. The survey by CBS News was conducted the second week of December, after Trump began announcing cabinet appointments.

The ratings fall along party lines: 70% of Republicans expect a good presidency, while 60% of Democrats predict poor results. That means evangelicals, who mostly supported Trump, have high expectations—but for what?

Religion reporter Sarah Pulliam Bailey, on her Washington Post blog, points to a half-dozen areas where Trump’s campaign promises intersect with evangelical interests. Some are the expected areas involving religious liberty. The nomination of Supreme Court justices who will uphold pro-life legislation topped the list. Trump also said he would defund Planned Parenthood, sign a bill that forbids abortions after 20 weeks, and make the Hyde Amendment permanent. It prohibits use of federal funds for most abortions. And Trump has expressed support for a group of nuns who have battled provisions in the Obama Affordable Care Act that mandate contraception as part of an organization’s health care plan. Southern Baptists have supported their lawsuit.

Trump promised to repeal the 1954 Johnson Amendment to the U.S. tax code, which prevents pastors from endorsing or opposing political candidates, or else lose their church’s tax exempt status. And he has taken a position on education funding that allows families to choose private, charter, or home schooling, with a promise to set aside $20 billion for vouchers in his first budget.

The U.S. will be a “true friend to Israel,” Trump said, a position common among evangelicals favoring Israeli interests over others in the Middle East and urging movement of the U.S. embassy to Jerusalem.

Many Southern Baptists would support these actions, if they came to pass. For SBC leaders who have been in contact with the future administration, the Trump presidency represents a new way of thinking about the White House. Since Ronald Reagan’s presidency, Southern Baptists in general have viewed Republican administrations as allies in the causes of pro-life, families and marriage, and religious liberty. They have, at the least, been sympathetic to evangelical causes, and even co-laborers in the faith. (Remember the stories of George and Laura Bush singing hymns at the White House piano with Attorney General John Ashcroft and Secretary of State Condoleezza Rice on the keyboard?) Democratic presidents, on the other hand, have often been at odds with evangelicals’ causes, even if they claimed to be Baptists, as in the case of Bill Clinton.

Donald Trump represents a third way of relating to the White House: a president who made promises to evangelicals and drew their support at the polls, but who shares no apparent faith commitment with the born-again community. (There are no stories of Trump walking on the beach with Billy Graham and committing his life to Christ. And the tycoon-turned-president has said he sees no need to ask for forgiveness for his sins.)

The evangelicals closest to Trump, including incoming vice president Mike Pence, take on the role of Joseph in Egypt—keeping the interests of God’s people before pharaoh, hoping to keep his ear and hold him to his promises.

Some voters who cast their ballots for Donald Trump said they did so because of concern for the U.S. Supreme Court. The February death of Justice Antonin Scalia left a vacancy, and three of the Justices—Ruth Bader Ginsburg, 83, Anthony M. Kennedy, 80, Stephen G. Breyer, 78—may be looking toward retirement in the next few years.

Focus on the Family founder Dr. James Dobson supported Trump. He told Christianity Today, “The next president will nominate perhaps three or more justices whose judicial philosophy will shape our country for generations to come.”

A LifeWay Research survey found 23% of evangelical pastors were most concerned about the candidates’ likely Supreme Court nominees. And 36% of Trump-supporting pastors cited the high court as a major factor in their choice.

Trump released a list of his potential Supreme Court nominees—20 judges and one senator, Mike Lee of Utah. Each met two criteria: they are pro-life and support the Second Amendment. The list was vetted and reviewed by the Federalist Society, which is comprised of conservative and libertarian lawyers, and the conservative Heritage Foundation.

Commentator Denny Burk told Baptist Press the list “does not alleviate the concerns that many of us have about his candidacy.” Because Trump didn’t promise to pick someone from the list, Burk said, “The list means nothing….And we are again being asked to trust the judgment of a man who changes his positions daily…” Burk is professor of biblical studies at Boyce College, the undergraduate school of Southern Seminary.

Priebus said Trump may choose a younger nominee. “Well, I tend to believe younger is better, too, but I can tell you what the president (elect) believes is that the most qualified, best person to serve on the Supreme Court is what’s most important….Certainly longevity’s a factor, but it’s just a factor. Competence and having the best possible person nominated is what’s most important.”

The 2016 presidential campaign and election exposed deeper divides than many knew existed in the U.S.­­—and within evangelicalism. White evangelical voters overwhelmingly supported Trump, even while some of their leaders voiced their opposition.

As Wheaton College’s Ed Stetzer said after the election, “The evangelical leadership is out of touch with the evangelical rank-and-file,” during a Christianity Today podcast.
Tension over the election appears to be at least part of a rift between some Baptists and the SBC’s public policy entity, the Ethics and Religious Liberty Commission.

In November, Louisiana Baptists voted to ask their convention’s executive board to study recent actions of the ERLC.

Will Hall, editor of the state’s Baptist Message newspaper, noted that the motion did not elaborate on the issues of concern, “but ERLC President Russell Moore has come under fire nationally from Southern Baptist laymen and leaders for a number of controversial actions and statements, including…his aggressive attacks on Southern Baptists who supported Donald Trump.”

Moore, who has led the ERLC since 2013, wrote an opinion piece for The New York Times in May in which he said the election “has cast light on the darkness of pent-up nativism and bigotry all over the country.” His article caught the attention of Trump, who tweeted that Moore was a “truly a terrible representative of evangelicals.”

The op-ed also sparked a fervent debate on the SBC Voices blog, where Baptists posted a variety of opinions on Moore, from “he did what we pay him to do,” to “it is difficult for me to imagine Russell Moore functioning as ERLC President if Trump wins in November.”

The questions about Moore and the ERLC are just one example of the impact the 2016 election could have on religious organizations and denominations, and on the nature of Christian leadership. The tension leaders face, Ed Stetzer said, is between recognizing the responsibility to speak prophetically, and realizing they represent a constituency who largely feel very differently than they do.

For Christian leaders, their influence in the next four years may well depend on how well they strike the balance.