Gaines: We must invite God into our churches 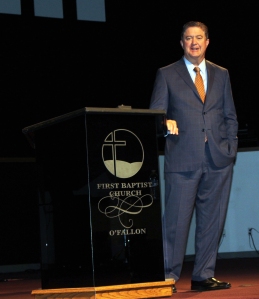 First Baptist Church in O’Fallon had a guest pastor in its pulpit Sunday morning. Memphis pastor and candidate for Southern Baptist Convention President Steve Gaines delivered the message at each of the church’s three morning worship services June 12.

The Bellevue Baptist Church pastor lamented Southern Baptist’s lack of focus on evangelism. “What’s happening in the Southern Baptist Convention is a tragedy,” Gaines declared. “We’re in a 17-year nose dive. This is unprecedented, we have more SBC churches, but fewer baptisms. If the people in those churches we’re planting aren’t evangelistic and soul-winning, we’re not going to reach this nation.”

His primary sermon text was taken from Acts 2:40-47. Gaines used Christ’s instructions for the church to exhort churches today to be more evangelistic.

He urged Southern Baptists to invite God back into their churches. “When God comes to church people start getting saved and baptized.” When people walk into a church “it doesn’t need to be dead. It ought to be alive with the power of God.”

Prior to the sermon O’Fallon’s Pastor Doug Munton, who will be nominated to serve as the convention’s First Vice President at tomorrow afternoon’s meeting, introduced Gaines as his good friend. He then endorsed Gaines for Southern Baptist Convention President saying, “I’m biased, I believe Steve is the right guy, at the right place, at the right time.”

Gaines is one of three candidates who will be nominated for the job of SBC President tomorrow afternoon. David Crosby, pastor of First Baptist Church, New Orleans, LA, and JD Greear, pastor of the The Summit Church in Raleigh, NC, are also candidates.

One response to Gaines: We must invite God into our churches