No ordinary election: What these SBC candidacies represent 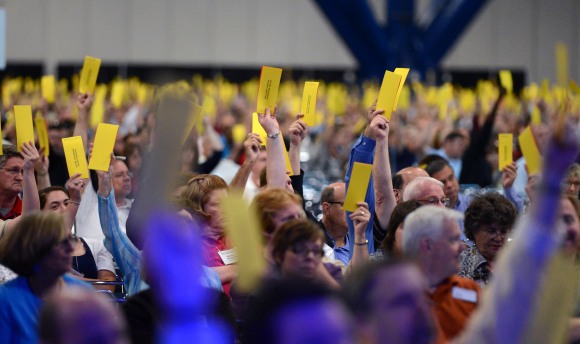 With another call to prayer for the redemption of America, another missionary commissioning, and another bunch of resolutions on national politics and the precipitous slide in our national moral values, this might appear to be another fairly predictable meeting when the Southern Baptist Convention convenes in St. Louis June 14-15.

The more significant news from the convention is not likely to come from its political statements or from protests by cultural liberals outside the hall. What can be said about the run for the White House, same-sex marriage, or sexual identity that hasn’t already been said? It will be in the election of an SBC president to succeed outgoing Arkansas pastor Ronnie Floyd that messengers will signal a turn.

Floyd has issued a “national call to prayer for spiritual leadership” in the Tuesday evening session. Floyd is using the mid-America location to address issues at the spiritual heart of America, in particular the need for evangelism and spiritual awakening, and renewed efforts at racial reconciliation. (See “What are the three greatest challenges facing the SBC?”)

By the time of the prayer gathering, messengers will already have selected a new president—and perhaps a new direction. At this crossroads, signs point to missions funding, evangelism and theology, and the age of denominational leaders.

The most obvious turn could be generational. Only recently has the “greatest generation” of Southern Baptists handed off leadership to their children, the Baby Boomers born after World War II. The possible election of 43-year-old J.D. Greear over Steve Gaines, 58, or David Crosby, 63, would confirm the handoff to Generation X, or the Baby Busters. These younger leaders, born after 1964, have already assumed leadership of the Convention’s two missions boards.

Leaders have reported that the demographics of convention attenders have shifted younger over the past decade. The meeting isn’t as gray as it used to be, and that’s good news observers say. These younger Southern Baptists are making their presence known through Baptist 21, SEND conferences, and other venues aimed at Busters and their quickly advancing successors, the Millennials. Electing one of their own could hasten the transition.

“One of the things God has put on my heart is that my generation needs to take personal responsibility for the agencies and the mission boards of the SBC and not just think of them as the SBC’s, but think of them as ours,” said Greear in his nomination announcement.

A second turning point for the Convention is the future of the Cooperative Program. Implicit in the election of a president is endorsement of his view of CP funding for missions and Southern Baptist work, whether it is whole-hearted and longstanding, recently renewed as part of the Great Commission Resurgence, or newly embraced as one of many ways of funding missions. The three candidates for president all speak highly of the Cooperative Program, but their churches have notable differences in their historic support of CP and their current giving levels.

Crosby’s response to a question from the Illinois Baptist is enlightening: “As SBC president, I will not talk or act as if a return to the society method of supporting our cooperative work is progress.” (See “What are the three greatest challenges facing the SBC?”) At its foundation, this is what a church’s record of CP support demonstrates: Is missions giving through Cooperative Program the main way Southern Baptist churches fund missions, or rather one of many ways?

And third, simmering under the surface in this election is the role of election in salvation and the future commitment to evangelism in the SBC.

“Listen very carefully: We have criticized evangelism right out of the Southern Baptist Convention,” Floyd told the SBC Executive Committee in February. “Years ago, something happened where pastors and churches that reached and baptized people effectively came under the microscope of other Baptists who oftentimes did not have a heart for evangelism themselves. A culture of skepticism about evangelism began to creep into our Convention. Evangelism began to die.”

This culture shift was framed by some as evangelism versus discipleship. Evangelism was criticized as “easy believe-ism” while discipleship was elevated. Discussion of the “sinner’s prayer” at the 2012 Pastors’ Conference was followed by Executive Committee CEO Frank Page’s appointment of an ad hoc panel to address the rise of Reform Theology and whether Calvinists and “Traditionalists” as they were called at that time could peacefully coexist in the SBC tent.

Gaines was an outspoken supporter of the “sinner’s prayer” style of personal commitment at the time, while International Mission Board President David Platt, then pastor of Birmingham megachurch The Church at Brook Hills was critical of evangelism that emphasized acts of conversion, such as “walking the aisle” at church, over discipleship of new believers that emphasizes personal recognition of God’s call and sovereignty in their salvation.

This election brings up that question again. Gaines and Crosby have traditional views on evangelism and conversion, while Greear’s theology is Reform. The church Greear pastors is evangelistic, baptizing 928 in 2014, but it is also active in the Acts 29 Network of church planting, which expects its members to hold Reform views. And of the three candidates, Greear has the greatest support among the rising group of younger, Reformed pastors in the SBC.

These three issues—and the candidates holding different views on them—stand before Southern Baptists at the crossroads.

– Eric Reed is editor of the Illinois Baptist