Illinois women on a mission in South Asia see lives changed by the story many there had never heard.

Editor’s note: In April, a team of women from Illinois traveled to South Asia to share gospel stories and witness how believers there are working to push back spiritual darkness. Lindsay McDonald, a pastor’s wife from First Baptist Church in Casey, captured the trip in words and pictures.

Okay, you can start,” Mim* says, leaning towards Gail Faulkner, who sits on the chair beside her. Having practiced the “Creation to Christ” story for months now, today is Gail’s opportunity to tell the gospel story that her team traveled nearly 8,000 miles to share.

“So, I should go ahead and start the story?” Gail confirms with Mim, a believer working to reach others in her country. About 20 women are gathered, clustered together on handcrafted floor mats.

A Hindu woman offered her simple, empty home for today’s story. The room is dark and still.

The women look expectantly at the visiting Americans and their translators and ministry partners—women from this country who have converted to Christianity.

“Yes, tell them. They are thirsty,” Mim responds with urgency. 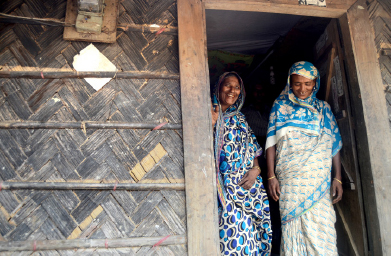 Women here talk to each other while they prepare meals, wash clothes in the village pond, and care for their children. When the women in the last village on the last day were asked about how to apply the story to their lives, they said, “If we spend less time gossiping, we will have more time to share the gospel.”

Gail, a pastor’s wife from Bethalto, Ill., joined this mission team even when this part of the world wasn’t on her radar. She says God made it clear to her that it was her time to be on the team, and cleared her path of any financial obstacles to traveling thousands of miles from home.

Joining her on the team were six other women from Illinois and three from the Carolinas. They came from a variety of life stages: young mothers, grandmothers, retirees, professionals. All prepared and trained for months to bring the message of hope Isaiah prophesied to the Israelites thousands of years earlier: a perfect sacrifice, Jesus.

The Illinois volunteers came to partner with two missionaries serving in this densely populated country, and three national believers who served as their guides and interpreters. These Christians focus primarily on evangelism to Muslim women, who they can encounter more freely because of the culture here. The nation’s oral tradition is built on conversations and storytelling. Much like the story about to begin in this dark house.

Life in South Asia is hard.

It bombards all of your senses—the smell of waste in the street, as adults and children sift through it, looking for items to recycle and sell. Cars honk in the dense traffic, and rickshaw drivers pedal passengers to and fro for a minimal wage. 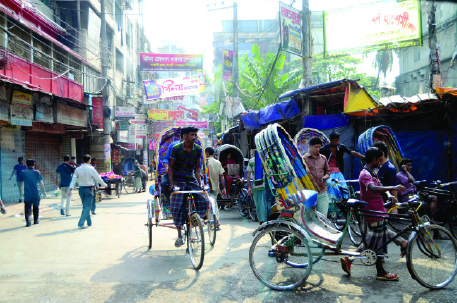 Sights of daily life whizzed past our van as we traveled the dusty, dirty, bumpy roads that are congested with chaos. Traffic, animals, people. Vendor after vendor sells fruit, meat and South Asian cuisine. Physically and mentally disabled adults lay on the side of the road, and beggars tap on the vehicle window looking for money.

“It is a place where you not only sense it, but also see the spiritual darkness on the faces of the people,” Amy says. The country is 98% Muslim and many haven’t heard about salvation through Jesus.Almost 16 million people hear the Muslim call to prayer fives times a day; some stop and pray and others proceed with their day.“Though you can sense the darkness, they are just like us—they are hurting,” team leader Kimberly Sowell says during a morning devotional. Sowell’s ministry, Bangladesh: For Faith and Freedom, supports job training for women and girls, offering them a way out of the hopelessness that is so prevalent.

“All of God’s people are called to be used of him but why do some not go?” Kimberly asks the team. They answer, We’re comfortable where we are. The missions call is for “other people.” There’s plenty of spiritual need at home.

Most of all, this place is hard.

“God is working here. That’s why there is persecution, if God wasn’t moving there would be no persecution,” says Mim.

Walking is a part of the daily routine here. While out one day in the capital city and a nearby port city, Gail says, “I noticed there was no life. The faces of the women passing me were stoic. No expression. The lack of hearing the voices of children crushed my grandma’s heart. I’ve never been to an area where the noise of children playing, yelling, running and crying could not be heard.”

Stepping into the Light of Life and Light of Hope Learning Centers is a different story. Within these walls, there is life! Young smiles greet the team as they enter. They play Twister, Phase Ten, and Old Maid with the girls to teach them colors, animals, numbers, and occupations.

The ministry Sowell began in 2013 supports efforts to provide nutrition, hygiene, education and vocational training to young women. Here, they also hear the gospel, so they can find faith and freedom in Jesus Christ.

“The Light of Hope Learning Center is an amazing place full of laughter and love,” says Connie Lang, a volunteer from First Baptist of Casey, on her first international mission trip. “It is run by an amazing missionary, Susan Kirker,* who loves the girls and their mothers.

“As we built relationships with the girls, I loved hearing them recite the Bible story that was being taught to them,” Connie says. “This trip has been life-changing. I have grown closer to the Lord and have seen the power of prayer at work.

“I would love to go back again.”

While leaving the capital city headed to our next area of work on Friday, we had just started to pray for the city when we drove by a mosque. Hundreds of men were lying facedown praying to Allah. Our hearts were sick to see the lostness right before our eyes. It’s everywhere—less than 1% are believers. You can feel the spiritual darkness.

Both centers are funded by the International Mission Board, but they are run independently from one another, with different directors and school formats. Light of Life, located in the capital, has a school for at-risk girls during the day and brings in Muslim women in the afternoons for sewing lessons.

Light of Hope offers similar activities. Girls have the opportunity to sew in the mornings while earning a daily wage, and then attend school in the afternoon.

Both centers give hope to hopeless lives of the girls living in the city slums. “Yet it is even more than that,” Gail says. “The girls are offered a daily clean shower, two meals for the day, an education, sewing skills, Bible teaching and love.”

Back in the dark village house, the Hindu and Muslim women listen to the “Creation to Christ” story and then take turns repeating it, trying to commit it to memory. Since they live in an oral culture, many do not know how to read or write. Messages must be verbally transmitted in speech or song among friends and family, and then passed down through generations.

More than 30 women accepted Christ after hearing the stories the team shared. Several who believed have already set up a time to be baptized—a big step of obedience in a place where the decision to follow Christ could bring persecution.

“God showed himself mightily to the South Asians and our team,” said Niece Edwards from First Baptist, Carmi. “I was stretched as never before and learned more about God’s sustaining power.”

“Walking through this South Asian country during this season of my life, really displayed how I need to walk beside my husband with the purpose of harvest,” said team member Kathy Fullerton. “We need to be intentional with neighbors, strangers, friends, and family because the gospel can permeate cultural bounds. Jesus died for those in burkas and overalls alike.”