Called to battle for souls

“There is no greater specialty than someone called and gifted by God” to bring the gospel of Jesus Christ to those who are lost, said former International Mission Board President Jerry Rankin at a recent gathering of church planters in St. Louis. 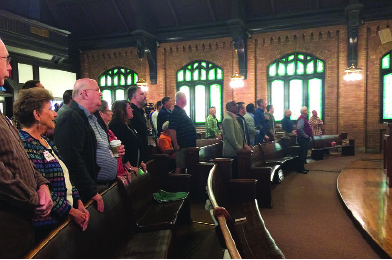 The acoustics inside Apostles Church were breathtaking as church planters began the day with worship.

During two sessions on prayer and spiritual warfare, Rankin addressed planters at a quarterly PlantMidwest meeting—recognizing them for the level of sacrifice and dedication their work requires, reminding them of the spiritual target on their backs because of their calling, and equipping them with ways to combat the enemy’s attacks.

Rankin shared experiences from his years as a missionary, pastor, and organizational leader, including his family’s time in Indonesia, when he grew frustrated because people weren’t responding to the gospel as he had envisioned.

But reminded of 2 Corinthians 4:4, “In their case the god of this world has blinded the minds of the unbelievers, to keep them from seeing the light of the gospel of the glory of Christ, who is the image of God,” Rankin said he began realizing mission work is not just a matter of strategy or learning how to present Christianity cross-culturally. It’s about engaging in spiritual warfare with an enemy who has people and nations in bondage to darkness and sin. He quoted 1 John 5:19, “We are from God but the whole world lies in the power of the evil one.”

He urged planters to recognize the essence of their evangelistic calling—being conduits through which God can lead people from darkness to light. But “Satan is an adversary,” Rankin continued. “He is absolutely opposed to the church growing…He is opposed to missionaries going out to take the gospel to closed countries and nations and unreached people groups. He is adamantly opposed to the individual Christian discovering the victorious Christian life.

“And he is most of all opposed to anyone who would presume to take charge of reaching those nations and people with the gospel of Jesus Christ.”

Rankin outlined four strategies the devil typically employs to prevent people from a relationship with the Heavenly Father: he keeps places and countries closed through restrictive government policies, he keeps people groups hidden and neglected from a believer’s sight, and he deters Kingdom advancement through persecution.

Fourthly and most effective of all, Rankin said, “[He] creates indifference among Christians toward a lost world and our mission task.” Satan causes churches to become ingrown and self-centered, believing that missions is optional.

Just being aware of this spiritual warfare, though, is a huge part of claiming the victory in Christ, he said. “We are to engage the battle and put Satan on the run…We, in the power of our Lord, are to stand in the victory…And prayer is connecting to the one who provides that power, that authority.”

Boiled down, the nature of spiritual warfare is simple, said Rankin. God’s purpose through his people is to be glorified. Satan’s purpose is to deprive God of being glorified in the nations.

And the most effective way to combat the enemy’s lies and schemes is through prayer, the former president explained. Not just bringing God our list of wants and needs, but forming a deep, intimate relationship with him. Because Satan trembles in the presence of the Almighty Creator.

Satan is a defeated foe, Rankin exclaimed, so don’t let his deceit lead you astray discouraged and defeated. “You have the victory in Jesus Christ!”

Morgan Jackson is an intern at the Illinois Baptist.