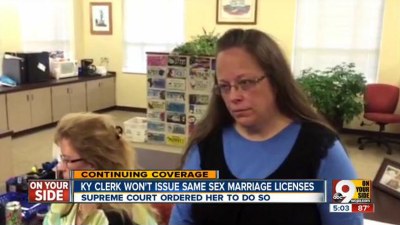 BREAKING: Davis has been released from jail on the condition that she shall not “interfere in any way, directly or indirectly, with the efforts of her deputy clerks to issue marriage licenses to all legally eligible couples.”

COMMENTARY | The jailing of Rowan County Kentucky Clerk Kim Davis by a U.S. District judge for refusing to issue marriage licenses to same-sex couples due to her Christian convictions, has caused about debate among Christians about whether she should or should not resign her position.

Southern Baptist Theological Seminary President Albert Mohler addressed the recent events on his blog, AlbertMohler.com. “The Christian church has long struggled to understand how Christian faithfulness is translated into faithful decisions in any number of political and legal situations,” he wrote. “How would a faithful congregation advise Mrs. Davis to fulfill her Christian commitment?”

He poses this and other questions which he answers, “There is no automatically right answer to these questions. Each can be rooted in Christian moral argument, and any one of these options might be argued as right under the circumstances.”

Mohler also examined the religious liberty issues raised by Davis’ incarceration, “Without doubt, the legalization of same-sex marriage will mean especially hard questions for Christians who hold government office — and especially those offices that deal most regularly with marriage.”

In a commentary, World magazine’s Marvin Olasky explains the difference between freedom of religion and freedom to worship. “Kim Davis is free to worship God in her church on Sunday mornings as long as she bows to the idol of same-sex marriage,” he wrote. “Otherwise, she stays in jail until she’s worn down or a judge’s heart changes. We have other national idols, such as political correctness and the welfare state, but this is the one in the spotlight now, and her refusal to bow is a big story.”

Over at the Ethics and Religious Liberty Commission’s website, President Russell Moore and Director of Policy Studies Andrew T. Walker, discuss the complexity of the issues involved. The two wrote, “We must be very clear about the distinctions here between persons acting as an agent of the state and persons being coerced by the state in their private lives. If the definition becomes so murky that we cannot differentiate between the freedom to exercise one’s religion and the responsibility of agents of the state to carry out the law, religious liberty itself will be imperiled.”