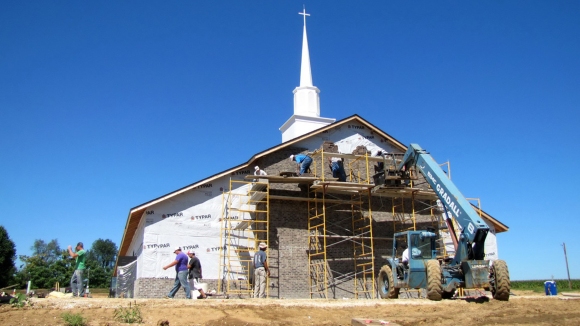 Pastor Don Hannel estimated 80% of the construction at FBC Pleasant Hill was done by volunteers. Photos by Joe Springer

In the year it’s taken to build a new church, Pastor Don Hannel and the members of First Baptist Church, Pleasant Hill, have seen God move in numerous ways. One moment that stands out: when they raised the 30-foot steeple in the air, pausing first to dedicate the building to the Lord.

“When we raised the steeple up…it went from a building to a church, a house of God,” Hannel said. “It’s just one of the moments you’ll never forget the rest of your life.”

The members of FBC Pleasant Hill met in their new sanctuary for the first time May 10.

The 15,000-square-foot building now sitting on what used to be 10 acres of corn fields has been a labor of love for the congregation, who started exploring the possibility of expanding or renovating their facilities a few years ago. Their land-locked original location downtown Pleasant Hill, located about 15 miles from the Illinois-Missouri border, was built in 1917 and was in good condition. But it left them little room for growth–or parking.

About 80% of the work on the new building was completed by volunteers, Hannel said. His church members worked alongside several groups throughout the process, including Carpenters for Christ, a church-building ministry that started out of a Southern Baptist congregation.

The Carpenters groups that worked with Pleasant Hill hailed from Attalla, Alabama, and brought 120 men to the rural Illinois community last summer. In 10 days, they raised walls, set trusses, and nearly put on the whole roof.

They also set up the steeple, gathering with the Pleasant Hill volunteers to lay hands on it and pray before the crane hoisted it up in the air.

The steeple experience wasn’t the only instance Hannel described as a “spiritual moment.” There was the time a pastor from Talbotton, Ga., called to see how he could help. (Hannel’s church had helped build a church for the Georgia pastor on a previous Carpenters for Christ mission trip.) When Hannel replied there was some brick work to be done, the pastor and four other men came to Pleasant Hill to finish the job.

Then there was the man who had been attending Pleasant Hill who volunteered to spend several days last winter with his brother installing more than 70 interior doors in the building. A few months later, the volunteer and Hannel were talking in the new sanctuary when the pastor felt led to talk about how to have a relationship with Jesus. The man knelt there at the altar and prayed to receive Christ, the first person to do so in the new building.

And he’s not the only one. Revival started at Pleasant Hill through the building process, Hannel said. Seven people were baptized in the new building in June, with six more waiting.

On May 10, the church met in the new building for the first time, with 282 people in attendance. (Previously, they had been running between 130 and 150.) They dedicated the new facility two weeks later, with a Saturday open house and special worship service on Sunday.

There were times in the process when it was difficult to press on, and the church had to rely on the Lord for strength, Hannel said. But seeing those 282 people come in, “it was just like everything disappeared at that point.”

The pastor has been at Pleasant Hill for 10 years; the last one has given him countless stories of God’s faithfulness to tell over the next many.

“We need to write a book on this some day,” he said, “as many things as God has done through this.”