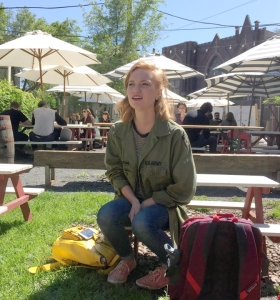 One of the first stops for Cassidy Winters and three other Transplant student mobilizers was an orientation session in the courtyard of a Chicago pie shop. Photo by Charles Campbell

HEARTLAND | Two groups of interns will work in Chicago this summer to assist church planters already on the ground, and to help outline the demographics of other neighborhoods in need of new churches.

Transplant, a summer initiative for students sponsored by IBSA, placed four “mobilizers” in various parts of Chicagoland in June, each paired with a church planter reaching out to people in the city or suburbs. Cassidy Winters said the mobilizers’ goal is to give their planters “more arms” to reach out in the community.

The college freshman from Edwardsville is serving alongside Dave and Kirsten Andreson, who are planting Resurrection City Church in Avondale on the city’s North Side. This is Winters’ second summer in Chicago. Last year, she admits, she didn’t know much about church planting. Shortly after her arrival, she remembers texting her mother something along the lines of, “I’m starting a church, Mom!”

This summer, Winters is helping the Andresons as they plant a church in a community of 40,000—and little evangelical presence. Growing up in her Christian home, Winters said, she “kind of got stuck in a Christian bubble…just not ever thinking about people who don’t love Jesus.” But in Chicago, there is a lot of hurt, and a lot of love is needed. Winters is helping the Andresons identify the projects they’ll tackle during ChicaGO Week, when teens from around the state come to Chicago for a week-long church planting practicum.

Cody Wilson is another student serving in the city this summer, along with a group a mobilizers recruited by the North American Mission Board for the Generation Send program. Instead of spending most of their time working with existing church plants, Gen Send-ers will develop a prospectus for a future planter who will start something new in a specific community.

Wilson, a student at Middle Tennessee State University, is serving in the Lakeview neighborhood and looking for what he calls “third spaces.” These are the coffeeshops, gyms, and arts programs where people hang out, and where a church planter might go to build relationships.

He had met a lot of people after just over two weeks in the city. “But it’s still obvious that in one of the busiest cities in the world…people are incredibly lonely and have very high walls and don’t let people in.”

In mid-June, team members joined Wilson, Winters and their fellow mobilizers to help further develop their prospectuses and projects. Their teams bring the total number of college students serving in Chicagoland through IBSA and NAMB to around 55 for the summer.

Look for more updates from Transplant and Generation Send interns, and a full report from ChicaGO Week, in the July and August issues of the Illinois Baptist.