Update: 4,870 messengers are now registered at the SBC Annual Meeting in Columbus.

Columbus | Southern Baptist Convention President Ronnie Floyd gavelled in the 2015 Annual Meeting this morning, starting a day in which messengers will complete much of the business scheduled for this week’s meeting. This morning: a 50th anniversary tribute to veterans of the Vietnam War, Floyd’s president’s message, and reports from the SBC’s six seminaries.

Afternoon business includes election of officers, committee reports, introduction of new motions, and the report of the SBC Executive Committee. As of Tuesday morning, 4,482 messengers are registered here in Columbus. 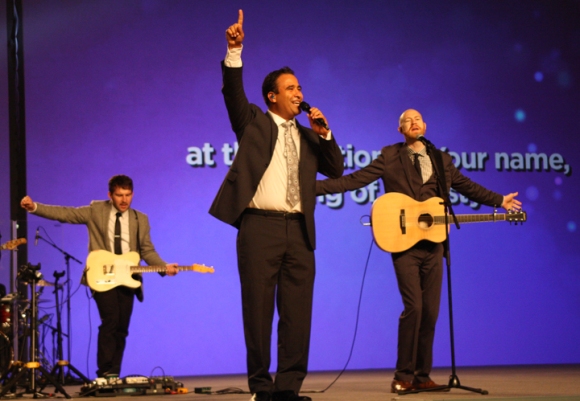 Julio Arriola (center) is the first Mexican-American to serve in the role of Convention music director, Ronnie Floyd said in introducing him this morning. Arriola is global worship pastor at Cross Church in Springdale, Arkansas.

Tuesday culminates with tonight’s Call to Prayer, streamed live on sbcannualmeeting.net and broadcast this evening on Daystar Television Network. Check back here for updates throughout the day!