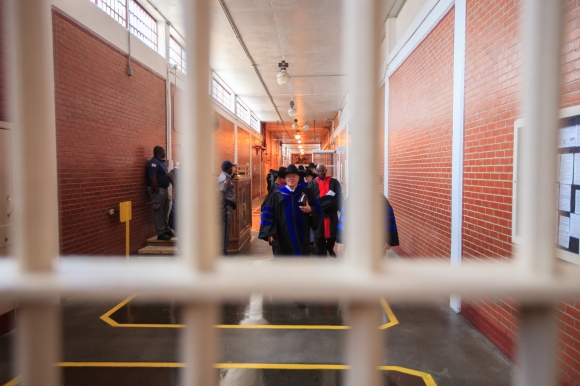 Inside the maximum security Darrington Prison Unit in Rosharon, Texas, May 9 was graduation day.

“You have done a great deal to educate the mind,” said Paige Patterson, president of Southwestern Baptist Theological Seminary, during the ceremony, “but this program is a little different, isn’t it? Because the program has not just been about the mind; it’s been about the heart.”

Patterson was speaking to the first-ever graduating class of Southwestern’s seminary prison program, itself a first for the state of Texas. The program was inspired by New Orleans’ Baptist Theological Seminary’s long-standing educational efforts at Angola Prison in Louisiana. 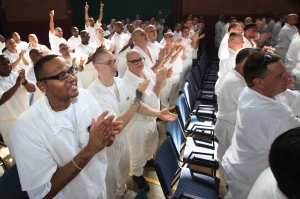 At Darrington, 33 inmates received bachelor’s degrees, as underclassmen cheered and watched a video feed of the ceremony (photo at right).

“When we started this, (Darrington) was one of our toughest, problematic units, and I’m here today to announce that it’s now one of our best,” said Texas State Senator John Whitmire in a press conference before graduation day.

Many of the graduates will leave Darrington this summer for other prisons, where they’ll help chaplains start similar programs. Texas Lt. Gov. Dan Patrick called the graduates “prison apostles.”

“I’m overwhelmed at what God has done,” he said at the ceremony. “Only God could do this.”