God’s sovereignty and praying for marriage 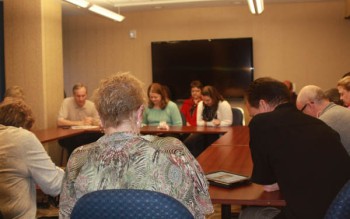 The IBSA staff, led by Executive Director Nate Adams, gathered this morning to pray for marriage.

Christians in the U.S. have been asked to pray for marriage today as the Supreme Court is hearing arguments in a case which could decide if same-sex marriage will be made legal in all 50 states. The outcome could also have far-reaching consequences for churches, military chaplains, Christian business owners, and others.

Many have warned that the case being presented today is of paramount importance comparing it to the Court’s 1972 decision in Roe v. Wade which legalized abortion in the U.S. SBC President Ronnie Floyd wrote on his blog, “What is at stake is great. This is undeniable. We do not control the Supreme Court. At this point, our number one role must be to pray. Regardless of the outcome, may God have mercy on America and teach us how to live daily.”

Russell Moore, president of the Ethics and Religious Liberty Commission (ERLC), stood outside the Court this morning and described the scene as “circus-like.” He wrote on his blog, “Rainbow flags were waving, as protesters on either side lifted aloft contesting signs. A man screamed through a megaphone about how ‘God hates queers’ right next to men in stiletto heels and nun’s habits. The whole scene drove me to pray, and almost to tears.”

The IBSA staff gathered this morning to pray for marriage. Executive Director Nate Adams led in prayer for attorneys arguing both sides of the case, for the justices, for those involved in homosexuality, for our nation to turn to God, and for Christians and pastors to share Christ in love, not condemnation.

Adams likened what is happening today to how the “Israelites must have felt facing the Red Sea as they heard the pharaoh’s chariots pounding behind them” and noted that God provided a way. No matter the outcome, he reminded, “God is still sovereign and on His throne.”

What are the facts in today’s case?

The Supreme Court is hearing arguments in the case of Obergefell v. Hodges, which is consolidated with three other cases from Kentucky, Michigan, and Tennessee. The case challenges the Fourteenth Amendment of the U.S. Constitution regarding same-sex marriage and state’s rights.

According the ERLC, the court’s decision will determine:

Read the full explanation from the ERLC.