This was no ‘chance’ encounter

When I said to my co-workers, “Well, let’s go meet a thousand of our closest friends,” I didn’t know how true that statement would be. We left our offices and drove the four blocks to Springfield’s Crowne Plaza Hotel, site of the 2015 Midwest Leadership Summit. And like so many of our Baptist gatherings, this one felt like Homecoming Week at Sandy Creek Church. We saw dear friends from across Illinois, and some we knew from the other dozen states in attendance. 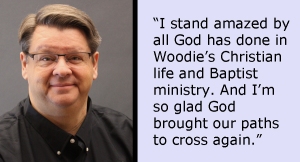 But I never expected to see Woodie.

After all, it’s been 35 years. And the last time I saw Woodie, he was a Mormon. In Alabama. Go figure. Woodie and his siblings were fourth-generation Reformed Latter Day Saints (RLDS) living in a fishing town on the Gulf Coast. We all went to high school together. Although our school was a ministry of a conservative fundamentalist church, no one made an issue of Woodie’s religion. All his family
were clean-cut, well-mannered, and better behaved than many in our class who claimed to be Christians. I remember Woodie as a great guy, a good football player, and very well liked. But lost.

Woodie came to that truth while in college. Through a campus ministry he came to a life-saving faith in Jesus Christ and left his family’s religion. Later, he attended Mid-America Seminary and was called to ministry. Eventually Woodie moved to Lamoni, Iowa, the place where Latter Day Saints founder Joseph Smith once lived and present-day home to the RLDS college. Woodie had attended that college for a couple of years until he began question the RLDS religion.

Returning in 1991, Woodie started a Baptist student ministry, reaching out to RLDS students and others.

Eventually he pastored First Baptist Church of Lamoni, the sponsor of his college ministry, for nine years, and just recently was called to lead Calvary Baptist Church in Clinton, Iowa. Woodie said God is opening doors to Brazilian soccer players (in Iowa!) because his son plays soccer and his wife is originally from Brazil. Go figure.

That’s why he was at the Midwest Leadership Summit and standing in the hallway outside the ballroom at the Springfield Crowne Plaza. Woodie is a Southern Baptist pastor in the Midwest, looking for fresh ideas, inspiration, and encouragement.

I stand amazed by all God has done in Woodie’s Christian life and Baptist ministry. And I’m so glad God brought our paths to cross again.

I should be more amazed that 35 years after high school—even though Woodie hasn’t changed much—I recognized him standing there. But that’s the Lord’s doing too.

Eric Reed is IBSA’s associate executive director for the Church Communications team, and editor of the Illinois Baptist newspaper.