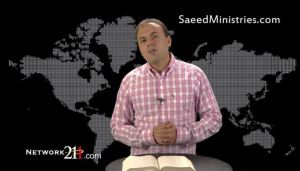 Image from a May 2012 YouTube video Saeed Abedini made before his imprisonment.

THE BRIEFING | At a meeting last week with the wife and children of imprisoned pastor Saeed Abedini, President Barack Obama said securing his release is a top priority, according to a release from the American Center for Law and Justice.

“The President was focused and gracious – showing concern to me and my children,” said Naghmeh Abedini. “I know that this meeting could not have occurred without prayer and I am grateful to the many people around the country and world who continue to pray for Saeed’s release.”

Obama reportedly told the Abedinis’ young son that he would try to have his father home by the boy’s birthday in March. The pastor, an American citizen, was arrested in Iran in 2012 and charged with “undermining national security,” Christianity Today reports. Last June, he was awarded a religious liberty award by the Southern Baptist Ethics and Religious Liberty Commission, which his wife accepted on his behalf.

Jury selection started yesterday in the trial over Houston’s Equal Rights Ordinance, spearheaded by a coalition of ministers who collected petitions to repeal the ordinance passed by the City Council last May. (The city disqualified many of the 50,000 signatures collected.) The complicated case also included an effort to subpoena communications and sermons by five Houston ministers; the subpoenas were eventually dropped.

Opponents of the Houston ordinance recently aided Plano residents in collecting signatures to stop a similar ordinance in their city, Baptist Press reported.

A rumored protest by Westboro Baptist Church didn’t come to fruition at a Quad Cities-area Illinois Baptist church, but representatives of the infamous Kansas congregation (which is not affiliated with the Southern Baptist Convention) did visit some churches in the area, and were met with counter-protestors. Prior to Sunday, January 25, Westboro protestors were scheduled to be at Northcrest Calvary, an Illinois Baptist State Association church in Rock Island.

Alabama is the most recent state to face a challenge to its ban on same-sex marriage, Baptist Press reports. Judge Callie V.S. Granade ruled the ban unconstitutional Jan. 23, in a case involving a lesbian couple who married in California but were denied adoption rights in Alabama. The state’s association of probate judges–who are responsible for issuing marriage licenses–said Granade’s ruling doesn’t impact anyone not named in the case.

The struggle continues between New York City public schools and churches that want to rent their space for Sunday worship, Christianity Today reports. The most recent development is an apparent change of heart by Mayor Bill de Blasio.

George Perdikis, who co-founded The Newsboys in the 1980s, has officially renounced his Christian faith, The Christian Post reports. The musician wrote in a recent post on Patheos.com: “I always felt uncomfortable with the strict rules imposed by Christianity. All I wanted to do was play rock and roll.”

Where does your city rank when it comes to “Bible-mindedness?” Barna and the American Bible Society released their annual list of the most Bible-minded cities in the U.S. Four Illinois cities landed in the top 50; see which ones at Barna.com.