Editor’s note: This piece is reprinted from Baptist Press (BPNews.net). Sanctity of Human Life Sunday is January 18. For resources, go to ERLC.com/life.

COMMENTARY | The claim of some pro-choice groups that Scripture does not address abortion would have surprised both Jews and Christians living in the first century. That’s because they were virtually unanimous that the Bible implicitly—though clearly—prohibited the killing of unborn children. 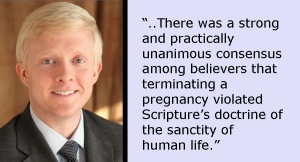 Abortion advocates today tend either to deny this fact or remain gladly ignorant of it. For example, Planned Parenthood, America’s largest abortion provider, issued a “pastoral letter to patients” last spring stating, “Many people wrongly assume that all religious leaders disapprove of abortion. The truth is that abortion is not even mentioned in the Scriptures—Jewish or Christian—and there are clergy and people of faith from all denominations who support women making this complex decision.”

Of course, the Bible does not contain the direct commandment, “Thou shalt not have an abortion.” But based on passages like Psalm 139:14-16, Jeremiah 1:4-5, Amos 1:13 and others, ancient Jews and Christians believed it was clear that God cared for the unborn and regarded abortion as a sin.

Some may be surprised to learn that abortion existed more than 2,000 years ago, with surgical and chemical abortions performed in pagan cultures hundreds of years before Christ’s birth. The Greeks were among the first Ancient Near Eastern people to permit abortion, with Plato arguing in “The Republic” that pregnant women over 40 should be required to have abortions. In contrast to pagan cultures, Judaism emphasized the value of unborn and pre-born life dating back at least to the time of Moses, when God’s people protected infant males from being slaughtered at birth as Pharaoh ordered (Exodus 1:15-21).

In fact, some scholars believe Pharaoh’s command to kill Hebrew boys “on the birthstool” (Exodus 1:16) was actually a command to commit partial birth abortion, with “birth stool” functioning as a Hebrew euphemism for “birth canal.”

Either way, the Jewish culture of life was evident, and the Jews of Jesus’ time expressed their anti-abortion convictions. The Jewish work Sentences of Pseudo-Phocylides, written between 50 B.C. and A.D. 50, taught that “a woman should not destroy the unborn in her belly.” First Enoch, which was written in the first or second century B.C., said it was evil to “smash the embryo in the womb.”

Josephus, a Jewish historian born in A.D. 37, summarized, “The Law orders all offspring to be brought up, and forbids women either to cause abortion or to make away with the fetus.”

Early Christians agreed. The Didache, a first-century document that some church fathers argued should have been included in the New Testament, taught, “Thou shalt not murder a child by abortion nor kill them when born.” Another Christian writing considered for inclusion in the New Testament, the Epistle of Barnabas, said, “You shall not abort a child nor, again, commit infanticide.” Both of these documents were read aloud in some churches.

When Spanish bishops convened a council in approximately 305 in the city of Elvira, they voted unanimously to decree eternal excommunication for women who had abortions—a decision that reflected their just condemnation of the practice though it failed to reflect the biblical promise of forgiveness to post-abortive women who confess their sin and trust Christ as their Lord and Savior.

“If a woman conceives in adultery and then has an abortion, she may not commune again…because she has sinned twice,” the council decreed.

Perhaps one reason the New Testament writers did not address abortion was that they did not need to. For the first 500 years of Christianity, there was a strong and practically unanimous consensus among believers that terminating a pregnancy violated Scripture’s doctrine of the sanctity of human life.

A thousand years later, John Calvin demonstrated that the Christian tradition of opposing abortion was still alive and well. Commenting on Exodus 21:22-23, Calvin wrote, “The fetus, though enclosed in the womb of its mother, is already a human being, and it is almost a monstrous crime to rob it of the life which it has not yet begun to enjoy. If it seems more horrible to kill a man in his own house than in a field, because a man’s house is his place of most secure refuge, it ought surely to be deemed more atrocious to destroy a fetus in the womb before it has come to light.”

In the strictest sense, abortion advocates are correct: The Bible does not speak explicitly to abortion. But that should not leave believers in a state of moral confusion any more than the Bible’s failure to explicitly address money laundering or internet pornography. For more than 2,000 years, the Lord’s followers have extrapolated from biblical principles that some behaviors are obviously sinful. The united witness of Jews and Christians regarding abortion is a case in point.

Basil, Jerome, Chrysostom, Calvin and a host of other believers from every nation, tribe, people and tongue would scoff at the claim that Scripture is silent and that God’s people historically have been divided regarding abortion.