It’s January, and another “polar vortex” appears to be descending upon our heartland homes. Just a few days ago the temperature outside was flirting with 50 degrees. But then yesterday was barely above freezing, and as I write now it’s 16 degrees, heading for a low of 6 tonight, with wind chill temperatures that will require those dreadful minus signs in front of them. 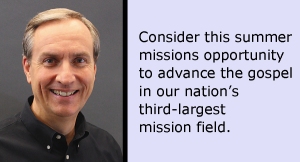 So instead I’m choosing to think about next summer, and I encourage you to do so too. Now, in the dead of winter, is a perfect time to start planning a summer missions experience.

Your church may already have a plan for sending one or more groups on mission trips outside your own community this year. Many churches in Illinois have adopted an Acts 1:8 strategy, and are seeking to send mission groups to serve nearby in their local association, as well as elsewhere in Illinois, North America and internationally. These are modern day equivalents of the “Jerusalem, Judea, Samaria, and the Ends of the Earth” mission fields that Jesus spoke of in His last words on earth.

If your church doesn’t yet have a mission trip planned for this summer, and especially if you have teenagers in your church, let me suggest one option where most of the planning has already been done for you. It’s called ChicaGO 2015, and it will be hosted July 26-31 on the campus of Judson University in Elgin. You can find more detailed information on the IBSA website, or by calling or
e-mailing Rachel Carter (217-391-3101 or RachelCarter@IBSA.org). Even if you only have two or three who can go, they will be quickly welcomed into the larger group.

During ChicaGO 2015, your group will be housed on the Judson campus there in Elgin, but during the days you will explore one or more of Chicago’s 77 neighborhoods or diverse suburbs. Morning training sessions and evening worship experiences will allow you to meet some of the dynamic church planting missionaries that are seeking to advance the gospel in our nation’s third largest mission field. And during the day you will work right alongside them, and alongside other students and adults from Illinois churches that share your heart for advancing the gospel there.

Wherever you live in Illinois, ChicaGO 2015 is relatively nearby, and affordable. Planning and preparations for the week, such as meals and work projects, will have been done by IBSA before you get there. Participants can be both students and adults, and the environment is one that’s safe, and yet that will open your group’s eyes to the vast and diverse lostness that is Chicago.

You see, Chicago itself is a vortex, and not just in the winter. A vortex is defined either as a “whirling mass,” or simply as “something overwhelming.” That’s why, when the frigid air from the Arctic Circle whirls its way down into Illinois, we feel the overwhelming
brutality of its icy grip. But there is also a whirling mass of people in Chicago that are in the icy grip of lostness. Many have never heard the true gospel in a way they can understand, or from people that care enough to meet them where they are.

That’s why now, this winter, right in the middle of our polar vortex, is an ideal time to plan a summer mission trip. Perhaps you will join our church planters and me in the Chicago vortex next July. Or perhaps your church has identified a different vortex of lostness or two to enter. Last year more than 26,000 Illinois Baptists did. It warms my heart just to think about it.