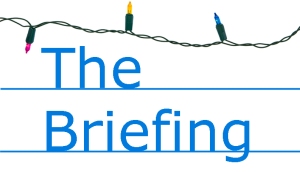 THE BRIEFING | Grinches might have tried to ruin a nativity scene in Indianapolis, but organizers at the Indiana Masonic Home got back-up in the form of GPS monitors placed inside the Jesus statue and several others.

Speaking of festive holiday displays, a Christian group in South Korea has decided not to reconstruct a Christmas tree tower on the border between North and South Korea, Christianity Today reports. “The establishment of our Christmas tree [tower] was to be a religious event aimed at promoting peace,” Christian Council of Korea (CCK) senior official Hong Jae-Chul told reporters. “However, our pure intention caused undesirable misunderstanding that it would aggravate inter-Korean friction.”

Where are people a little less worried about big holiday displays? In New Jersey, apparently, where Liquid Church is planning a “spiritual flash mob” for Christmas Eve. Read the Christian Post story here.

“We tend to idealize holidays, but human depravity doesn’t go into hibernation between Thanksgiving and New Year’s,” blogs Russell Moore. The president of the Ethics and Religious Liberty Commission gives five pointers for those who face tension around the Christmas dinner table.

Every time a bell rings … It’s a Wonderful Life is on TV again. Especially this time of year. But there’s more to the classic movie than just serving as a staple of Christmas-time viewing. Critic Phil Boatwright says, “Without any sermons or altar calls, It’s a Wonderful Life reveals how God’s love transforms and sustains. For me, that makes it the best film of all time.”