Pulling apart or pulling together 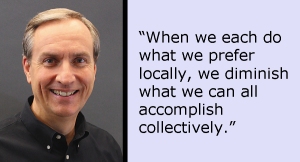 And yet, Seattle is not alone. The Minneapolis, Minnesota, city council passed a similar measure earlier this year. In Hawaii, they now celebrate “Discoverers’ Day” instead of Columbus Day, while in South Dakota it’s now “Native Americans Day.”

As much as I appreciate our nation’s Native American heritage, actions like these seem to me to denote a troublesome attitude or mindset, and yet one that I’m noticing more and more, even in Baptist life. It’s a mindset that says, “We’re mainly interested in what’s relevant and valuable to us here at home, and less interested in the bigger picture of what others are doing.”

In a way, it’s a mindset that’s compatible with the deeply held Baptist belief in autonomy. “No one outside our church is going to tell us what to do!” Yet at the same time it’s a mindset that tugs against the very spirit of unity and cooperation that have always been the hallmarks and strength of Baptist churches.

The way I see it expressed more these days is through practices such as designated rather than cooperative giving, or ecumenical rather than denominational partnerships. For example, one large Baptist church in the south that used to give more than $1 million through the Cooperative Program recently shifted more than 90% of that directly to their preference, international missions. And I see Baptist churches of all sizes occasionally doing missions or benevolence projects with partners whose doctrinal positions I daresay they have not examined.

Some of this is people just naturally doing what they want, or supporting what they find most compelling. But in those individual choices or preferences, there are often also great losses. When we each do what we prefer locally, we diminish what we can all accomplish collectively.

As we come to the close of another year here in Illinois, and perhaps finalize our church budgets, I would encourage us to do more pulling together and less pulling apart. There is already great individuality and diversity among our churches. And yet it is our unity around Baptist doctrine and cooperative missions that pulls us together, and allows us to accomplish together things that no individual church could do on its own.

Recently I’ve been invited to a number of churches to share, usually in a combined adult Sunday school class, how and why “cooperative missions” works, and then to preach in the morning worship service. Each time I do, there are older adults who come and say something like, “That’s why I’ve been Southern Baptist all my life.” And there are younger adults, many of whom didn’t grow up in a Baptist church or receive any childhood missions education, who say, “You know, I don’t think I really understood how we work together with other churches, but that really makes sense.”

In other words, our churches are already full of indigenous peoples, who naturally go their own ways. Our responsibility as autonomous but cooperating Baptist churches is to pull people together around the Word of God and the Mission of God.

Columbus wasn’t the first or only discoverer of America, and he wasn’t perfect. But when we celebrate in his name, we pull together as a nation, and we affirm the spirit of adventure and discovery. Likewise we should enthusiastically pull together as Baptists, around the name of Jesus Christ, and in support of the wonderful adventure we share, establishing His Kingdom in a new world.