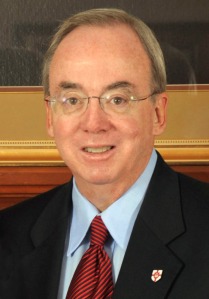 David Dockery, a leading Southern Baptist thinker and college president for 18 years, will serve as the next president of Trinity International University.

“We are overwhelmingly grateful to God for the invitation from the Trinity Board to serve the students, staff, faculty and various institutional constituencies
in the days ahead,” Dockery said after his unanimous election.

He has served as president of Union University in Jackson, Tenn., since 1995. Union is affiliated with the Tennessee Baptist Convention.

“Almost every Southern Baptist seminary and many key Baptist universities, including Union University, have a number of Trinity grads on their faculties,”
Dockery told the Illinois Baptist. “So Trinity’s influence in Chicagoland, across the nation, and around the world has few parallels in the entire evangelical world.”

Dockery announced last year his intention to transition out of his role as president at Union. During his tenure, the school more than doubled in enrollment,
expanded and improved its campus, and increased its net assets from less than $40 million to $120 million. Dockery also established an annual scholarship banquet that has drawn speakers like George H.W. Bush, Colin Powell and Condoleeza Rice.

He helped establish Union as a leading center for Baptist education with events like the Baptist Identity Conferences of 2006 and 2007. And he led the school through the aftermath of a devastating tornado in 2008.

“As we were considering the opportunities beyond our days at Union (we always used the language of transition from the presidency to the next phase;
we have not really thought of this as a time for retirement), we asked the Lord to grant us guidance and to open doors that would be clear to us (not only
to us, but also to others) that the Spirit of God was leading our steps,” Dockery said of the process he and his wife, Lanese, have followed from Union to Trinity.

“Trinity’s commitment to theological education with excellence, their focus on global opportunities and partnerships, and the distinctive prospect of serving in one of the world’s great metropolitan areas were all strong attractions for us.”

Trinity is affiliated with the Evangelical Free Church of America, and Dockery will officially assume the presidency after the denomination’s board of directors approves his appointment. He will begin serving as Acting President June 1.