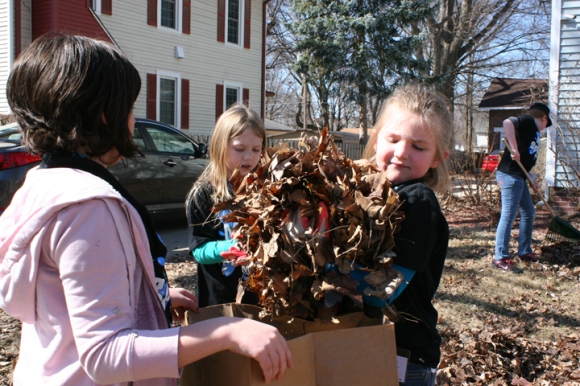 Springfield | One by one, kids told their Children’s Ministry Day stories in brief, honest sentences.

“We raked up gum balls, and not the kind you chew,” said Gavin.

“It made me feel really happy, because I love cooking and I love helping people,” said Elana, who helped cook a meal for families at Springfield’s Ronald McDonald House.

Ella, a volunteer from Pittsfield, answered a question about whether her yard work crew had stayed positive during the day: “We mostly did it with a good attitude.”

Created by national Woman’s Missionary Union, the day of service for kids has taken on a life of its own in Illinois. Nearly 1,100 children, leaders and volunteers representing 75 churches served at nine locations around the state on March 15.

This year’s theme, “Make a Splash,” came from Matthew 10:42, where Jesus says, “And whoever gives just a cup of cold water to one of these little ones because he is a disciple – I assure you: He will never lose his reward!”

Children’s Ministry Day is now IBSA’s most successful mission involvement activity, said Mark Emerson, who leads the organization’s missions team. The event has grown in number of locations and participants each year since 2011, when he organized the first set of projects in Springfield. Local associations began hosting the projects last year, and the service day expanded to nine cities in 2014, including first-time locations Bridgeport, Chicago, Decatur, Granite City and Peoria.

“I think more churches identify that this is a high impact project with an easy engagement possibility,” Emerson said. “The logistics of the day are already complete, so all the church has to do is to figure out how to get the kids enlisted, and get the kids to the event.”

Pastor David Brown has led kids from his church, Dow Southern Baptist, to Children’s Ministry Day each of the last four years. Standing outside an urban ministry center in Springfield, he recalled each of their projects: making baby blankets, baking cookies for police officers, visiting with nursing home residents, and this year, raking leaves and sorting donated supplies.

“This is one of the best events that we can do, because we’re starting at a foundational age,” Brown said. His fourth grade daughter, Cameryn, accompanied him to Springfield this year and has participated in every Children’s Ministry Day.

Helping people is a bonus, Brown said, but days like this are really about growing the church. The teenagers at Dow Southern are planning to go on their first World Changers mission trip this summer to Cincinnati.

“We’ve done a couple of just individual mission trips, but they’ve never been the big organized ones,” Brown said. “It’s coming out of the group that said, ‘Well, we did Children’s Ministry Day, what are we going to do now?’”

The day is certainly about expanding the kingdom through service, but it’s also an opportunity to teach kids spiritual truth. Rob Gallion kicked off the Springfield location with a devotional about Jesus washing the disciples feet. In simple terms, he explained that that’s what the kids would be doing during the day.

The day can also serve as a jumping off point for churches that want to implement more missions involvement and awareness, Emerson said. “We will follow up with the churches that attend, and seek to connect them to mission education possibilities in their church.”

Any church interested in starting a new missions organization can receive six months of curriculum free from WMU through IBSA. Contact MarkEmerson@IBSA.org for more information.