(Editor’s note: New Orleans in Rear View. Now that we’re back home, our Illinois Baptist news team reflects on the question: What is the lasting value of the 2012 SBC?) 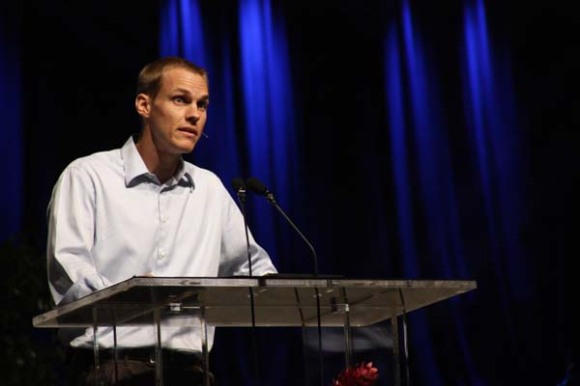 David Platt, pastor of The Church at Brook Hills in Birmingham, Ala., delivers a Pastors’ Conference message in New Orleans on true repentance and salvation.

Before the convention, many (especially us press types) were buzzing about how a growing debate over Reformed theology might come up from the floor. The answer: It didn’t really pan out like we thought it might, at least in terms of a heated debate.

Instead, Pastors’ Conference speakers and panelists at some of the surrounding meetings encouraged Southern Baptists to work together, even if it means crossing theological lines. And some, most notably Alabama pastor David Platt, spoke passionately about the bigger fish we have to fry.

During his message Monday afternoon, Platt referenced a YouTube video from a message he preached at an inter-denominational conference earlier this summer. On the widely-watched video, Platt said the sinner’s prayer is a “superstitious” prayer that never appears in Scripture, and called into question some traditional evangelism methods.

In his message at the Pastors’ Conference, Platt admitted that as a young pastor, he would be wise to watch his words. But then he stayed true to what he said briefly in the video, pleading with Southern Baptists to preach the true Gospel, full of the messages of repentance, belief, discipleship, and global mission.

Two days later, after some debate on the convention floor, messengers approved a resolution upholding the “sinner’s prayer” as a biblical means to salvation.

How we lead people toward a saving knowledge of Christ, and where we find the conviction of our own salvation, is the most important conversation we can have, in my view. I’m grateful for the discussion, and look forward to watching and listening as God moves us closer to His heart for people.