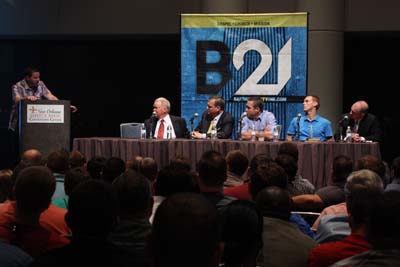 At Tuesday’s Baptist 21 luncheon, hundreds of young people balanced turkey sandwiches and chocolate chip cookies on their laps as six Southern Baptist leaders reminded them of the price that was paid for the theological stability they enjoy today.

Paige Patterson, Al Mohler, Fred Luter, Danny Akin, J.D. Greear and David Platt weighed in during a panel discussion of the Conservative Resurgence (Southern Baptists’ return to orthodox doctrine beginning in the late 1970s) and the future of the SBC. As conversation continues to simmer over the surge of Reformed theology in the SBC, the panelists, who themselves represent a variety of theological perspectives, urged their listeners to hold fast to the inerrancy of Scripture.

“What was gained can be so quickly lost,” Mohler said. “It was excruciating, it was difficult, it was a near-fought thing, in the sense that it could have gone in the other direction. There was a victory that created a precious opportunity that’s a stewardship that we know can be lost at any time…

Every single year that passes is going to be more difficult, in terms of our cultural context. There are going to be issues we don’t even know to imagine today that your generation is going to have to imagine. It’s going to require the full wealth of conviction; if you do not nail your ministry to the foundational truth of the inerrancy of God’s word, you will – it’s not a question of if, it’s a question of when – you will go off the tracks.