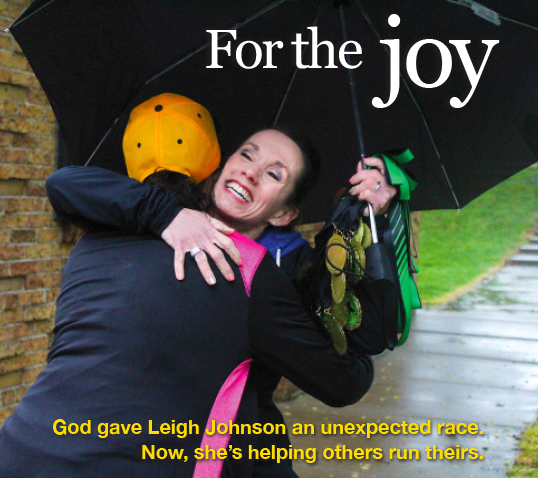 Decatur | Deana Moore didn’t mind the less than stellar running conditions that greeted her early on Saturday morning, April 28. Instead of derailing her from participating in a planned 5K race, the rain and unseasonably cool temperatures helped her enjoy nature and the people she ran with in the event, which is held along with IBSA’s Priority Women’s Conference.

“It was quite an accomplishment for me too, because I was able to run the whole thing without walking or stopping,” said Moore, a member of Tabernacle Baptist Church in Decatur. Running alongside her were several other women who participated in a spring “Run for God” Bible study that met on Wednesday evenings at Tabernacle.

The 5K in Decatur was a “graduation race” for the class led by Leigh Johnson, a veteran runner and the wife of Tabernacle Pastor Randy Johnson. Run for God is a curriculum created in 2010 by Georgia runner Mitchell Hollis that combines the physical and the spiritual in a 12-week study that also includes group runs.

At Tabernacle, Johnson’s group ran outside on Wednesday evenings when they could, and inside when the weather didn’t permit it. The building’s upstairs loop was their track, she said, as the group carefully dodged around children from the church’s Awana program.

“They were very gracious to kind of bob and weave with us,” Johnson said. The run also took the class through the balcony around the sanctuary, where they heard the worship band practicing for Sunday’s worship service.

The music could well have served as a reminder for the group’s ultimate purpose—to grow closer to God while doing something he has equipped them to do. “Being able to physically do those things—[to] build up to running like we did—I know that wasn’t me,” Moore said after her recent 5K. “I know that it was all God helping me to do that.” 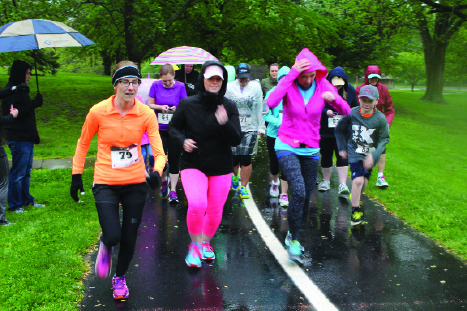 One class for all levels
Leigh Johnson first heard about Run for God during last year’s Priority conference. IBSA’s Carmen Halsey, director of women’s missions and ministry, introduced the curriculum at the annual 5K race and offered to partner with churches who wanted to use it as an evangelistic outreach.

Johnson went home and looked up the program. “I was all over it,” she said.

Each week of the study focuses on a devotional piece and correlating Scripture passages, along with an educational component about running.

One week, the lesson focused on Jesus feeding the 5,000. He recognized the physical hunger in front of him, but also an even deeper need—the spiritual hunger of the people. Johnson’s group talked about how the things people do—going to church, reading books, listening to sermons in the car—are good and valuable. But they’re snack-like compared to the sustaining nourishment of a relationship with Jesus that includes personal quiet time, reading, praying, and searching. 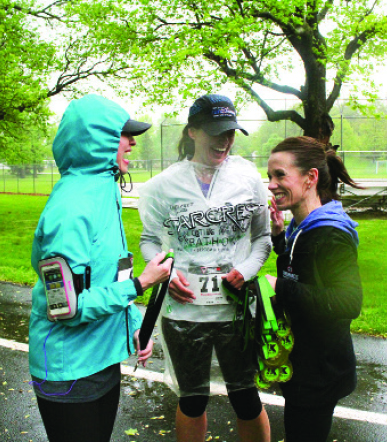 Members of Leigh Johnson’s Run for God Bible study group were among the runners, and she greeted them at the finish line.

Before their Wednesday evening runs together, the women discussed the Scripture passages provided with each week’s lesson. Johnson brought in local experts—including a physical trainer and a representative from a running shoe store—to help teach the group about the proper way to run.

Johnson said the study was beneficial to people at all stages of physical fitness, and spiritual development.

“I think it’s beautiful in that sense, that it could be for anyone,” she said. “For the runner, the non-runner, the person that’s been a Christian for years, a non-Christian, or a baby Christian that’s just accepted the Lord.”

One woman in the class was brought back into the hope of a relationship with Christ, after feeling like her connection with him had been broken. Another rediscovered the joy of personal devotional times with God.

Deana Moore said the week the class was challenged to share their own stories was particularly effective for her. “It made me think about my own testimony: if I’m called to give it, am I prepared for that?”

Since the 12-week class ended, Moore has also already signed up for two more 5K races, and is involving her teenage daughters in running with her.

Johnson, a self-described uncomfortable public speaker, discovered the encouragement of her group—and strength from God—could help her do something she didn’t previously think was possible. After she made a Facebook promotional video for the class and flyers were printed about the upcoming study, she realized, “I’m really going to have to do this,” Johnson said.

At the Priority 5K in Decatur, she had to take on a completely different role after injuring her foot just before the race. Rather than running with her group, she had to take a step back and cheer them on at the finish line. Johnson stood in the rain under a large umbrella, greeting her friends as they completed the run and handing out finisher’s medals.

Had she run herself, she said, she might have forgotten what the day was supposed to be about. Instead, she ran a different race that Saturday, one that, judging by the hugs she gave and received, was every bit as vital.

For more information about women’s ministry and missions opportunities across Illinois, go to IBSA.org/women or contact Carmen Halsey at (217) 391-3143 or CarmenHalsey@IBSA.org.